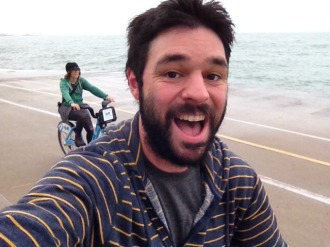 I have been out of town since Seattle’s bike share system launched, so to deal with my intense Pronto jealousy I had to check out some Divvy bikes while in Chicago.

I grew up in St. Louis and went to college in Illinois, so I have been to Chicago a fair number of times. But I have never had this much fun getting around town, and I have definitely never had this clear of a picture of the city’s geography. For the first time, I actually think I know where I am most the time, and it’s all thanks to bike share.

Biking around also had a very unexpected side-effect: The city feels a lot less mean. At first I was a bit intimidated by the idea of biking in this sprawling car-filled metropolis, but once I got on the bike the city softened. Quality bike lanes like the ones on Dearborn through the heart of the Loop and the fantastic Lakefront trail definitely helped, but somehow I feel even more comfortable biking around Chicago than I do trying to navigate on foot and transit (and way more comfortable than driving a car here, which is terrifying).

Unlike in Seattle, Chicago does not have helmets available at bike share stations. Like most of you, I am so accustomed to wearing a helmet when I bike that I feel a little naked if I don’t have one. In fact, I drive so rarely that I have even started to feel a bit naked when I get in a car without a helmet.

But for the most part, it did not feel dangerous to ride a Divvy without a helmet, especially in the city center and on streets with good or decent bike lanes. The bikes are so upright, heavy and slow that I just didn’t feel threatened. And people who drive (except for one jerk) sure give Divvy riders a lot of space, something I was not expecting in a city where people drive so aggressively it can feel like you’re playing chicken every time you try to merge onto the freeway. 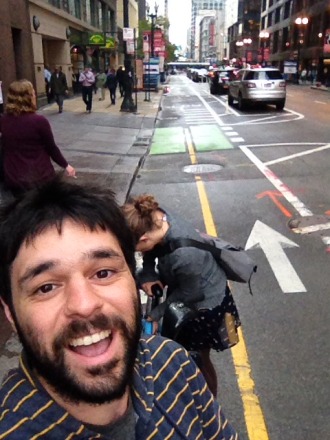 However, there were times when the bike lanes would suddenly end (I’m looking at you, N Clark Street) or where we’d need to navigate the few busy streets that cross the freeways or rivers when I certainly would have preferred wearing a helmet (maybe some football pads, too). Like Seattle, Chicago has a long way to go before it has a connected network of truly safe bike routes (and like in Seattle, I-90 sucks here, too!).

But another nice thing about bike share is that whenever you feel a little sketched out by the street you’re on, you can just pull over, dock the bike and walk or catch the L instead. And we did that several times. When you are riding a privately-owned bike, you are responsible for it until you get it back home. But with bike share, your bike appears and disappears in an instant. Once you dock it, it’s as though you never had a bike, and that is surprisingly liberating. 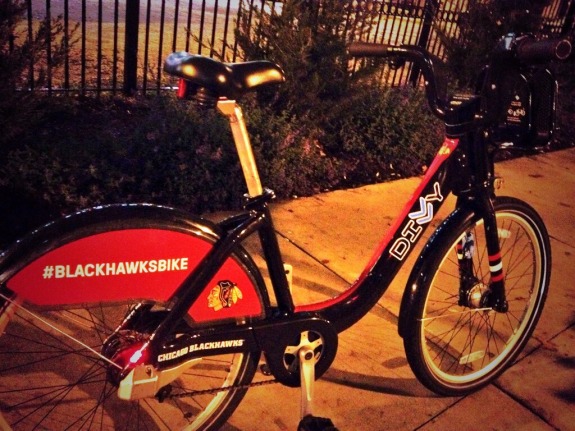 In by Divvy adventures, I stumbled on a #blackhawksbike, which is essentially a great IRL and social media marketing campaign by the Chicago Blackhawks NHL team. And despite my childhood hatred for the Blackhawks and their troubling use of Native American stereotype imagery, I was definitely drawn to the rare black and red bikes whenever I found one docked at a station. It’s like spotting a black sheep or albino pigeon.

So who is going to be the first Seattle sports team to launch a campaign like this for Pronto? 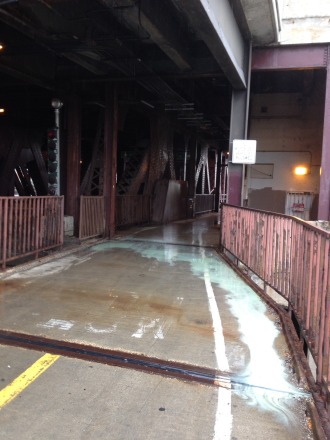 What is this green goo dripping from the freeway above? I rode through it. I hope I’m OK…

Chicago is a big city and goes forever. Many times our trips ran over the 30 minute limit. However, we were able to easily avoid overage charges by pulling over and docking, then undocking the bikes. But in a city where a 30-minute bike ride only gets you a through a couple neighborhoods, it would be even less stressful to get 45 minutes or an hour per checkout.

But unlike with Pronto, docking and undocking can happen instantly. Pronto says that it takes about three minutes before their system will let you undock another bike.

Trips over 30 minutes probably make up a small percentage of the system’s trips, and pulling over every half hour to check in at a dock really isn’t that hard, so perhaps it’s not a critical issue. And maybe it is necessary to avoid people keeping the bikes out of service while grabbing a coffee or lunch. But the 30-minute limit is by far the biggest complaint I have heard from talking to locals about Divvy. Distances are just longer in Chicago than in many other cities. This place is huge and densely packed with homes and destinations for miles and miles.

Oh, and Seattle, we really need to build a functional high-capacity transit system. Like, now. It’s so awesome.

Founder and Editor of Seattle Bike Blog.
View all posts by Tom Fucoloro →
This entry was posted in news and tagged bike share, chicago, divvy. Bookmark the permalink.