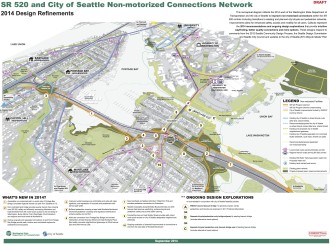 Plans for the state’s megaproject to replace the SR 520 Bridge are getting better in many ways, but major gaps in the walking and biking environment still remain, especially in the Montlake area.

The majority of the project’s Seattle end remains unfunded, but the state is moving forward with design work in hopes the legislature steps up and provides the more than one billion dollars still missing.

The state presented some updated concepts for some pretty good new trail connections around the project this week, including a connection on the Portage Bay Bridge to Capitol Hill and new Lake Washington Loop and Arboretum links. But the project is still a highway expansion project, and plans include some huge intersections and a very wide, car-packed Montlake Boulevard.

There are also no clear plans for a new biking and walking connection across the ship canal, which is needed since they cannot widen the historic Montlake Bridge to accommodate the ever-increasing number of people biking and walking between Montlake and UW.

First up, let’s look at the good stuff. The state’s glossy concept image makers have been pumping out some very high quality stuff showing off the improved biking and walking connections. You can see these images and their context in the presentation PDFs at the bottom of this post. 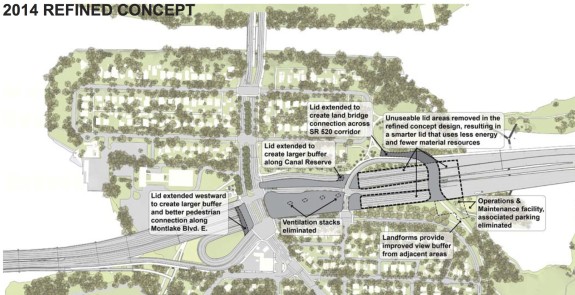 The biggest change to the Montlake area is a new bridge to provide a quality trail connection from the Arboretum/Lake Washington Boulevard across the expanded highway. Here’s what that could look like from the sky looking southwest. 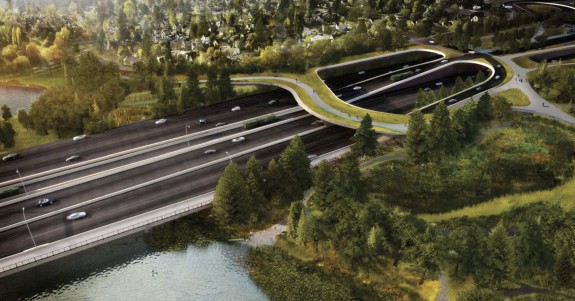 And from this view you can see the new trail beyond Lake Washington Boulevard, looking north: 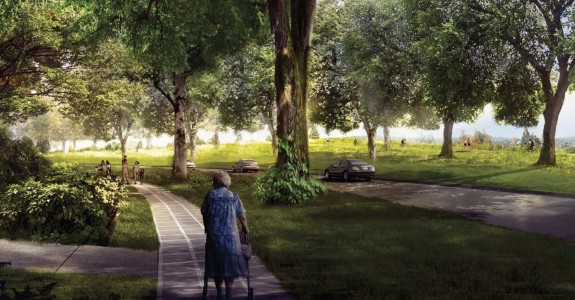 Below is what planners are now imaging for the Bill Dawson Trail (the existing dark and skinny trail that travels under 520 just west of Montlake Boulevard. Yes, it has a name). This view looks east from the 520 underpass toward a new Montlake Boulevard underpass. The ramp on the left is how you will get up to the west sidewalk of the Montlake Bridge. 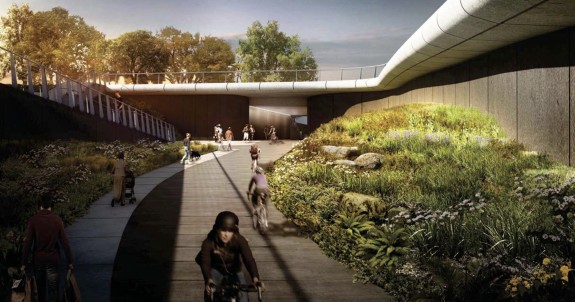 The next view looks at the new transit stop on the Montlake Lid, which will replace the (totally not ADA accessible) flyover stop that exists today. Paths lead to and from the Lake Washington Loop bike route across a new lid over the freeway, which is all good. What this image conveniently crops out is the massive size of Montlake Boulevard just right of the frame, where the street has a remarkable nine lanes, three more lanes than it has today. 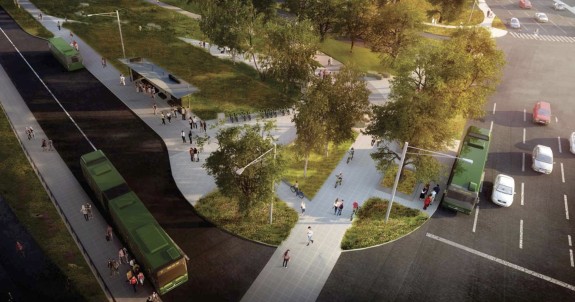 The concept for the shoreline trail connecting from Lake Washington Boulevard to Marsh Island under the 520 Bridge has also been greatly improved. While passing under a dozen or so lanes of an expanded SR 520 is probably not going to be as pristine experience as this image shows, it does seem like a pretty fun trial connection. 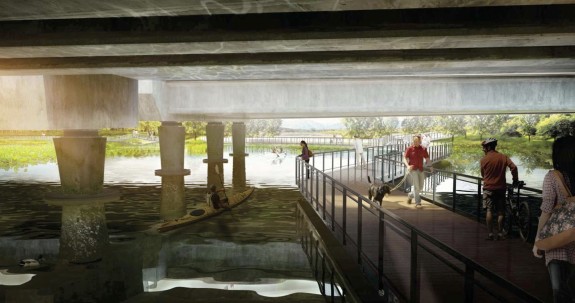 And it’s true, project planners are now planning a biking and walking trail with a gradual grade across the Portage Bay Bridge to connect up to Roanoke Park, Interlaken Park and Capitol Hill from Montlake. They have two designs in the works. Here’s what the cable stay bridge option would look like from the path: 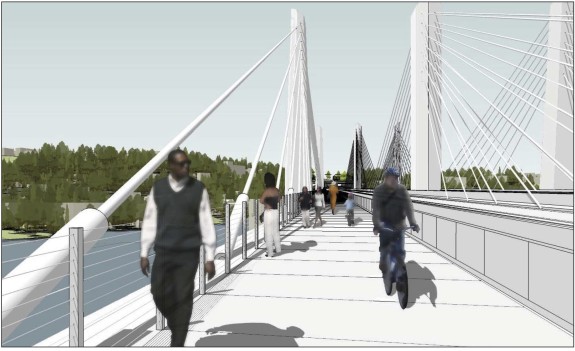 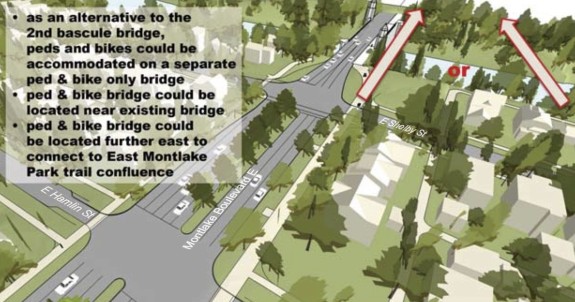 There is still no clear plan for an improved Ship Canal crossing for people biking and walking from Montlake to UW, including UW Station and the Burke-Gilman Trail. This probably would mean building a new bike/walk bridge either adjacent to the existing Montlake Bridge or further east to meet up with the new trail network. The good news is that the need is on planners’ radar. The bad news is that the state has not fully committed to funding it, despite a city study that the existing conditions are already beyond capacity for current walking and biking levels. 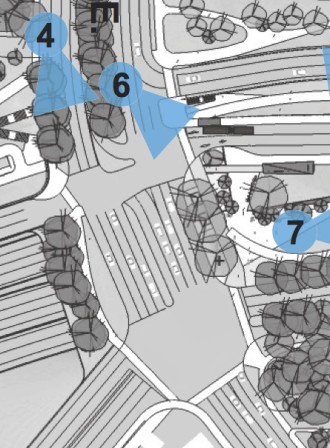 And the worst part of the plan remains Montlake Boulevard itself and the expanded on and off ramps to the freeway. There are too many lanes to create a comfortable and safe space for people walking or biking. It is being designed as though Montlake Boulevard is a highway, not a major neighborhood commercial street (it is technically SR 513, but it should be treated like a neighborhood commercial street). Plans include dramatically expanded space for cars at the expense of everyone else.

This not only includes Montlake residents, but also regional residents coming across the new 520 Trail or the Lake Washington Loop bike route, people connecting from the 520 buses to UW Station, people heading to and from UW and the Burke-Gilman Trail, and people coming down from Capitol Hill on the new Portage Bay Trail.

Today, Montlake Boulevard is six lanes wide as it crosses 520, and it is an extremely stressful and uncomfortable environment. The state’s plans would add another three lanes, bringing the total to nine. The Montlake Bridge will remain four lanes to the north and there is neighborhood pressure to make 24th Ave safer to the south through Montlake and up to Capitol Hill and the CD by changing it to three lanes.

There are no plans for a complete trail or protected bike lanes on Montlake Boulevard itself despite the fact that would be the most direct connection to the transit stops, the commercial core of Montlake and the planned neighborhood greenways there. Crossing the wide on and off ramps will not be comfortable on foot or bike.

So while planners have come a long, long way from original plans (which did not include the Portage Bay Trail and put many of the trail connections into dark trenches), this is still a highway expansion project, and the core changes to Montlake Boulevard itself remain either neutral or a downgrade for the walking and biking environment (if you can imagine that). It’s great that planners have clearly listened to people’s concerns about the trail connections. Now we just need to address Montlake Boulevard, the most difficult and important piece.

Seattle Neighborhood Greenways (with the help of Montlake, Madison and Central groups as well as Cascade Bicycle Club) put it this way in a recent list of project suggestions:

Below are some documents from the recent 520 meeting. You can see more on the state’s project website.