Hempfest is this weekend, so expect big delays on Elliott Bay Trail (or give in and join them) 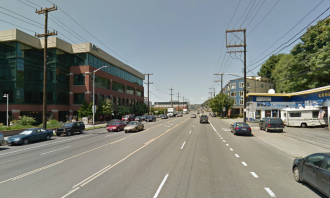 Hempfest is back for its annual bike-trail-closing pro-marijuana fest in Myrtle Edwards Park. The good news is that, if you are headed to Hempfest, bike access is excellent. Hempfest even recommends arriving by bike and will have racks set up at the north entrance.

But if you are just trying to bike through the area and utilize the vital bike connection provided by the Elliott Bay Trail, you are on your own to either try to walk your bike through the crowds (and through security) or to find a way around it all.

You should also be prepared for delays for days before and after the festival as planners set-up and break-down. In fact, you may have already noticed vehicles driving on the trail, since set-up began this week. Try to give yourself extra time in case you have to walk your bike, and save your frustrating rants for emails to the city leadership urging them to create an actual bike detour next year.

The only detour option anywhere close to the trail is via the car-crazy Elliott/15th Ave. There are bus lanes you can bike in for some of it, and the west sidewalk is not awful since there are few cross-streets (though it will probably be packed because of Hempfest). But if you can, it might be best to reroute all the way to the Fremont Bridge and bike the extra miles (though then you’ll have to deal with the awful Dexter/Mercer construction).

One thing you don’t want to do is get justifiably frustrated and then yell at Hempfest volunteers. They’re volunteers, they didn’t cause this mess. But if you see something dangerous (like dangerous cable routing across or near a bike path, which was a problem in previous years), be sure to report it to the Hempfest folks.

Hempfest causes friction with people on bikes every year, and both sides are in an understandable position. Hempfest likes the beautiful location for their popular “protestival,” and people on bikes need to get home or to work or wherever they are going.

This is a major bike route, and having no reasonable detour is crazy. We have suggested in the past that the city work with Hempfest to create a temporary bikeway on Elliott Ave while the festival folks are working in the park. You can’t simply close the only comfortable bike route through an area just north of downtown and expect everything to go well. People on bikes don’t just disappear because there’s a festival.

But for at least one more Hempfest, it looks like you’re on your own. If you find yourself getting too frustrated, maybe it’s best just to give in and join the now-totally-legal festivities. If you show up to work late and high, you can blame the city’s lack of bike lanes on Elliott. I’m sure your boss will understand.

Here are the ample bike directions from the Hempfest website:

Perhaps the best way to get to Hempfest is by bike. Myrtle Edwards Park is part of the Elliott Bay Trail which connects to the massive Burke Gilman Trail. One may easily navigate the regional trail system from Sammamish, Lake Forest Park, Bothell, Kirkland, etc.

When approaching on the Burke-Gilman, one has two main routes. The first option is to cross the historic Fremont Bridge, the most frequently opened drawbridge in the United States. Take a left onto Westlake and ride along the west side of Lake Union all the way downtown.

The second option is to ride the Burke-Gilman to the Ballard Locks, which are open from 7 a.m. – 9 p.m. daily. After crossing the locks, coast through Magnolia, and into the magnificent train yards before hitting the glistening waterfront. If the locks are closed, take the 15th Ave bridge, right on Dravus, left on 20th and down by the train yards.

To the south, the Elliott Bay Trail runs past downtown to SoDo and the stadiums, where one can (sort of) connect with the I-90 trail or continue south along Alaskan/Marginal Way to hook up with the West Seattle Bridge.

Mon-Thurs (August 12-15 ), and Mon-Wed (August 19-21) from 7:30-8:30 AM is vehicle free time on East path of Myrtle Edwards and Centennial parks. Hempfest vehicle traffic is suspended for that hour during weekday set-up and tear-down to respect morning bike commuters who use the parks.

For public safety, BICYCLE RIDERS MUST DISMOUNT during Seattle Hempfest.  ALL DAYS, ALL HOURS.

Bicycles should enter through the North entrance in Centennial Park to utilize the bike racks, or use the bike racks at Bay and Elliot. Attaching bikes to the fence at Olympic Sculpture Park is not allowed.

10 Responses to Hempfest is this weekend, so expect big delays on Elliott Bay Trail (or give in and join them)