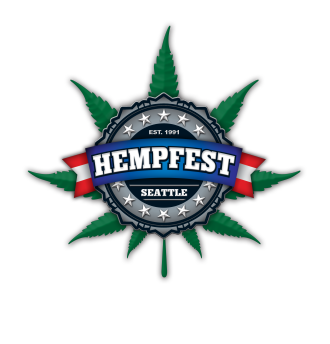 Seattle’s worst-located annual festival is starting to gear up, frustrating people biking on the Elliott Bay Trail through Myrtle Edwards Park. Hempfest loading started this week, and the impediments will not stop until August 21, a week and a half from now.

I’ve already received one email from a reader who said he had to swerve into the grass to avoid a truck driving on the trail. Last year there were many close calls and several crashes due to Hempfest operations. But organizers say they are working to make this year go more smoothly and better mark cables and hoses.

The Elliott Bay Trail is a vital regional transportation corridor for people biking and walking from downtown to Magnolia, Queen Anne and northwest Seattle. There is no other option available for people biking through the area. With workers blocking the route for a week and a half and people on bikes with no other way through, it’s a recipe for frustration and conflict.

Myrtle Edwards Park could be a great a place for a smaller festival, where bike travel and festival goers can coexist. But Hempfest is huge and has controlled and secured entrances. It’s great that Hempfest is so big, but either a quality trail detour needs to be provided (temporary cycle track on Elliott?), or the festival should find a spot more suited to its size.

Here’s a letter we received recently from event organizers (apologies for not posting it earlier):

Dear Bicyclists, sharing the parks during the 10 days that Seattle Hempfest is under production has been a challenging proposition for all. While we at Hempfest feel the need to exercise our freedom of speech over cannabis prohibition, we also feel a strong responsibility to use our rights responsibly, and work hard to make sure that others who wish to use the parks can do so with the least impact.

We believe there is room for improvement on both sides relating to bicycle traffic through the parks. Certainly, it is been difficult for all parties, and the priority is public safety for everyone in the parks and beyond. To that end, and in the spirit of cooperation and good will, we are reaching out to the Seattle bicycle community in the hope that we can develop a better dialogue, and through increased communication and cooperation (and potentially even participation) we can better mitigate some of the issues that have arisen in past years.

We know that some of our staff has not been as responsive to bicyclist issues in the parks; it is important to point out that some bicyclists have also been hostile, unresponsive, and uncooperative with our staff and also with the guidelines for bicyclists in the parks set-forth by the Seattle Special Events Permit that Seattle Hempfest must observe and enforce.

We want to do a better job, it really matters to us. We want our event to be safer, less of a hassle and more enjoyable for the members of the bicycle community who ride through the Olympic Sculpture Park, Myrtle Edwards Park, and Centennial Park while Hempfest is using and stewarding those areas of public and private property.

Please be advised of the following info, and share with your members and the bicycle community:

During Set-up and tear-down, Mon-Thurs (August 12-15), and Mon-Wed (August 19-21), from 7:30-8:30 AM, is vehicle free time on all paths of Myrtle Edwards and Centennial parks. Hempfest vehicle traffic is suspended for that hour during weekday set-up and tear-down to respect morning bike commuters who use the parks. During other hours on these days, there are vehicles in the parks, primarily using the east path, the normal bicycle path. This is why bike traffic will be shifted to the west path.

There will also be electrical cords and hoses to support the sound systems and food vendors. Those cables and hoses will cross the paths and that will be marked. These are visible and “open and notorious.” Please keep an eye out for these.

During the three days of the event (Aug. 16, 17, 18) bicycles must dismount. Bicyclists should enter through the North entrance in Centennial Park to utilize the bike racks, or use the bike racks at Bay and Elliot. Attaching bikes to the fence at Olympic Sculpture Park is not allowed.

Please be aware that a short section of the west path, near the lighthouse at the south entrance to “Centennial Park” has a short detour placed by the Port of Seattle, to bypass a small piece of the trail that collapsed as a result of a winter storm.

Lastly, we encourage members of the bicycle community to volunteer as traffic monitors. You will be working to help keep bicyclists safe, and also get a more balanced view on our experience with the bicyclists riding through the parks during our event production period.

We hope to learn about other ways to partner with the bicycle community and make everyone’s Seattle Hempfest experience safer, more enjoyable, and more productive.

47 Responses to Trucks driving on Elliott Bay Trail? Must be Hempfest time again!