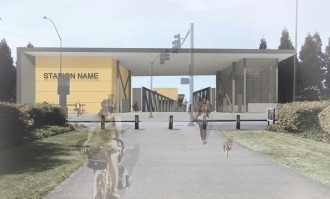 Image from 2013. The planned bike cage is on the right.

Sound Transit is hosting an open house Thursday to discuss updated plans for the North Rainier/Judkins Park East Link Station, the only new Seattle station on the Eastside-bound light rail line scheduled to open in 2023.

Among the vital details for station planning is secure bicycle parking and improved bicycle access for both the Rainier Ave and 23rd Ave entrances.

This section of Rainier Ave is a high-priority street for a street safety and bicycle facility upgrades. The Bicycle Master Plan calls for protected bike lanes on Rainier from MLK to 12th Ave, running right in front of this station entrance. The station should be designed assuming that bicycle use on these lanes will be very high, since it will likely be among the most heavily-used routes between downtown and the southeast neighborhoods.

It also would not be out of the scope of this project for Sound Transit to help Seattle fund bicycle access improvements, like protected bike lanes on 23rd and Rainier and neighborhood greenways connecting to people’s homes. Of course, these improvements should happen well before 2023.

Station plans presented in 2013 showed some quality bike parking plans, like a secure bike cage, bike lockers and standard bike racks. But for a neighborhood where so many people bike in 2014, it’s very likely that the station’s plans won’t be enough after nearly a decade of anticipated bicycling growth. After all, the I-90 Trail leads directly to the station’s proposed entrance on 23rd Ave. As Cascade Bicycle Club put it, “we believe demand will quickly fill the cage and bike lockers.”

More details on the open house:

Sound Transit has reached an important milestone! Design plans for the Rainier station located in the center of I-90 with entrances from Rainier Avenue South and 23rd Avenue South, are 60 percent complete.

Project documents and past meeting materials