This op-ed is by Gordon Padelford. He is the Neighborhood Support Coordinator with Seattle Neighborhood Greenways, lives on Capitol Hill, and loves parks.

Have you heard there is a new parks levy in the works?

Seattle Neighborhood Greenways has been participating in the parks levy discussion as a safer streets coalition because people throughout Seattle are separated from their favorite parks by dangerous roads, and we believe this can and must change!

Through a great deal of effort and luck, one of our coalition members, Beacon B.I.K.E.S., inspired a creative collaboration between Seattle Parks and SDOT staff so that the Beacon Hill Greenway now seamlessly connects across S Spokane St  to Jefferson Park. A corresponding gateway and trail into Jefferson Park now welcomes community members. What was once an insurmountable barrier for kids and elders is now a wonderful access point. 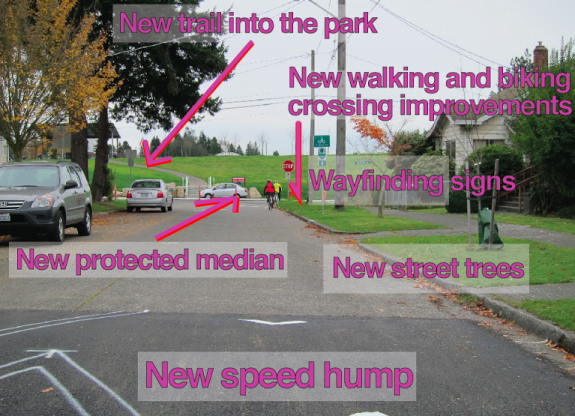 We can’t count on the bureaucratic stars aligning every time communities need better access to and through parks. We believe equitable access is a basic, core function of our park system. That is why we’re excited the new Parks funding proposal includes funding for safe access to into parks.

There are many other proposed investment initiatives on the levy that are outside the scope of our mission to comment on, and you should decide for yourself whether they are worthy to be funded. What is critical is that the $321,000 for connecting to our parks be maintained as the package moves forward, or even increased to be commensurate to the great need for more accessible parks.

Please sign our letter, or show up to the public hearing on Monday April 7th at 6pm at City Hall and voicing your support for safe and equitable access to parks.

Much attention has been given to equity in terms of geographic distribution of park resources, and rightly so. In addition, we need to start considering how physically accessible parks are to the people who live near them. Parks should be accessible to people of all ages and abilities, not just able-bodied adults who can dash across lanes of traffic.

The Seattle Neighborhood Greenways community coalition envisions a Seattle parks system where our kids can safely bike to and through parks for fun, or simply to get home. We envision a Seattle parks system where grandparents can safely walk to and through our parks as they enjoy staying active or to pick up a quart of milk from the grocery store. More abstractly, as the 2011 Bands of Green Report calls for, we envision our parks seamlessly woven into the urban fabric of City, and connected to each other by green & pleasant trails and neighborhood greenways. Our vision is shared by many partners including Cascade Bicycle Club and Seattle Parks Foundation.

Investment initiative 4.9 called “Activating and Connecting to Greenways” is a good first step towards this vision. It provides $321,000 per year to allow the Parks Department to work across silos and collaborate with SDOT to make our parks more accessible to people walking and biking, and help connect parks with neighborhood greenways. There are roughly 200 places where proposed neighborhood greenways could better connect parks or trails. In addition, through this initiative the Parks Department could help provide valuable expertise when Seattle hosts open streets events (similar to Portland’s Sunday Parkways) that link parks.

Want even more background information before you sign sign our letter or show up to the public hearing?

The 2008 Parks and Greenspaces Levy, a property tax that funds $24 million per year of parks maintenance and operation expires at the end of 2014. If nothing is done to replace it the parks we all love will fall further into disrepair and an estimated $267 million maintenance backlog will grow even larger.

A citizen’s advisory committee, called the Seattle Parks and Recreation Parks Legacy Plan Citizen’s Advisory Committee — that’s a mouthful — was established by the City Council in 2013 to help advise our elected leaders on the content and structure of the next parks levy. In their final report, they recommended $57 million per year to maintain and invest in our parks. In terms of structure, the citizen’s advisory committee and the mayor proposed using a metropolitan parks district rather than a traditional levy to fund the package. Stay with me — it’s about to get wonky.

A metropolitan parks district is a special taxing district similar to a port or a school district that has the permanent ability to levy property taxes up to a level specified by the state. Being a separate entity, it is not constrained by the total bonding capacity of the City of Seattle. The way this parks district is proposed, our elected City Councilmembers would be the chairs of the district and would be able to direct funding to the existing City of Seattle Parks and Recreation Department. In plain English, the proposed Seattle Metropolitan Parks District would simply give the City Council the authority to levy a property tax that can only go towards funding our parks.

I’m not here to convince you of the efficacy of a parks district vs a traditional levy vs other sources of revenue, although Cathy Tuttle, myself, and the Seattle Neighborhood Greenways’ steering committee do think it’s a good way to fund our parks, assuming certain accountability and transparency measures are built into it. To learn more view the Mayor’s FAQ or the FAQ of the Seattle Parks for All campaign.

Finally, as Mayor Murray said, “ultimately my goal is not getting my funding source passed, it’s getting our parks funded.”

This parks district proposal funds $57 million per year in maintenance and investment initiatives. It was proposed by the citizen’s advisory committee, tweaked slightly by the mayor, and now is being reviewed by the City Council’s Select Committee on Parks Funding.

This committee is hosting a public hearing on Monday April 7th at 6pm at City Hall, and they want to hear from people like you about what is important. If connecting safely to parks is important to you, please consider showing up (even if you don’t want to speak we’ll have green scarves to wear in a show of support). If you can’t make it, please consider signing our letter. The future of our parks is in your hands.

6 Responses to Padelford: Let’s invest in neighborhood access to parks