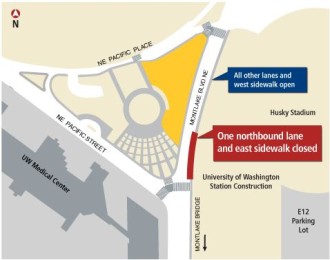 It’s gonna be quite a weekend for disruptions on and around the Montlake Bridge.

Expect detours and delays as construction on the UW Link Light Rail Station works on the sidewalk on the east side of Montlake Boulevard. Though work times could change due to weather, the plan is for the sidewalk to close at 7 p.m. tonight and will not open until Saturday evening.

Then on Sunday, a crew filming a commercial for Humana Healthcare in the morning. The filming may require delays.

Details on the sidewalk work, from Sound Transit:

Temporary sidewalk and lane closures on the east side of Montlake Blvd.

Beginning this Thursday March 27, through Saturday, March 29, Sound Transit’s contractor will restore the sidewalk and curbs on the eastside of the intersection at Montlake Blvd. and NE Pacific Street.  In order to do this work, crews must intermittently close one northbound traffic lane and the east sidewalk south of the intersection of Montlake Blvd. and NE Pacific Street.

To minimize traffic impacts, the lane closure will be in effect from Thursday, March 27, 7 p.m. through 3 a.m. and Friday, March 28, from 7 p.m. through 5 p.m. Saturday, March, 29*.
Signage and flaggers will help direct pedestrians and bicyclists around the work.
Crosswalks across Montlake Blvd. at NE Pacific Street will remain open.

Details on the Sunday morning filming:

Neighbors please note: Dates and times are best estimates and subject to change due to the many variables inherent in the filming process.  The production will do its best to give notice of changes, should any occur.
.

Commercial film production Company O Positive will be filming scenes on and around the Montlake Bridge this Sunday morning, March 30th.

Closures and Detours:  The Montlake Bridge will be closed from 5AM – 9AM for the filming, and will be opened at various times for approximately 20 minutes, and lowered to clear traffic for at least 30 minutes between openings, from 9AM to 8PM.  The production will place approximately 20 “picture cars” along the street to create the traffic jam on both sides of the bridge during the filming, which will be captured as the bridge is raised and lowered multiple times.

Equipment:  Cameras for the filming will be hand-held, mounted on tripods and on a dolly track, placed in a boat and on a condor lift on the side of the road. A radio-controlled helicopter will capture aerial footage from 5AM through 8PM (flying over the water east and west of bridge; on Hwy 513 north side of the Montlake Bridge; over the Montlake Bridge looking down on the traffic and Bridge positions).  Radio-controlled helicopter will take off and land from West Montlake Park at the NW corner near the water, and along the waterway filming toward the bridge.

Traffic:  We are working with Seattle Police who will coordinate the full closure and intermittent vehicle and pedestrian traffic control during filming segments. Our production assistants will work with police and ask pedestrians to hold or take alternate routes around our shooting area for the shooting segments.

This entry was posted in news and tagged construction, montlake bridge. Bookmark the permalink.