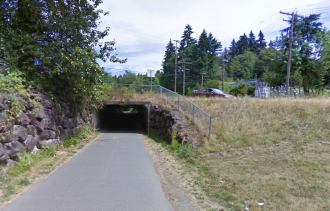 People who use the Burke-Gilman Trail in the Bothell area should plan on King County workers closing the tunnel near Wayne Golf Course for overnight repair work.

To help keep the trail open for commute hours and busier daytime use, King County Parks is conducting the work at night. Expect the tunnel to be closed between 8 p.m. and 6 a.m. Monday through Friday of this week.

UPDATE 3/21: Sounds like the delay will continue until March 27. From King County Parks: “Just got word late this afternoon that the nighttime closure of Wayne Tunnel along the Burke Gilman Trail in Bothell must be extended into next week – March 24-27, reopening March 28 (fingers crossed).”

Not only will the repair work help keep the tunnel in good working order, but it will also prepare the walls for a mural planned to be painted later this year.

King County Parks has been making nighttime repairs and improvements to the Wayne Tunnel on the Burke-Gilman Trail in Bothell since early March, including sealing leaking joints, and preparing the tunnel walls for a new mural that will be painted there later this year.

Additional work must be done that will require a trail closure through the tunnel, from 8 p.m. to 6 a.m. nightly, beginning Monday, March 17 and running through Friday, March 21.

We’ve scheduled the work during the overnight hours in an attempt to minimize impacts to trail users, however, we realize that some trail users could be impacted by this nightly closure.