Bikes should fit on the proposed downtown gondola, would you use it? 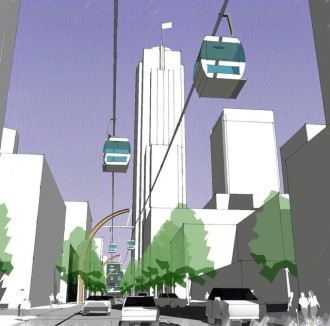 Imagine a gondola from the waterfront to the convention center with a stop at Pike Place Market. Now imagine that you can bring your bike on board. Would you use it?

That’s the plan that Pier 57 and Waterfront Ferris Wheel owner Hal Griffith announced Tuesday. The privately-funded gondola is designed to increase access to the remade waterfront, and is scheduled to open shortly after the viaduct is torn down.

The gondola would run along Union Street, suspended well above the trolleybus wires. Ticket prices have not been set, but the Seattle PI reports they could end up around $5. 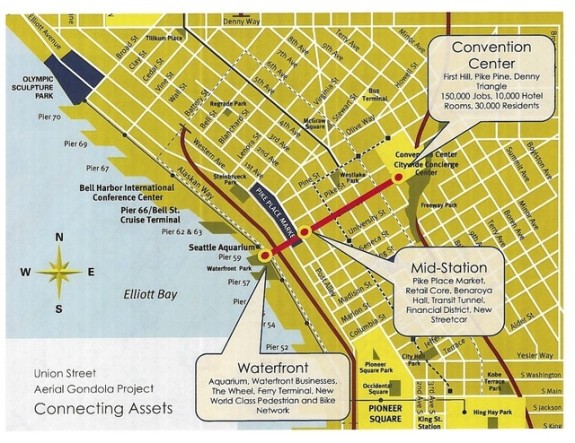 Seattle Met tweeted that the gondola should not only take bikes, but planners are already thinking about how it could integrate with bike share:

@familyride Griffith noted that the gondola can carry bikes and could help a future Seattle bikeshare redistribute bikes around downtown.

• Where: The gondola would run from Freeway Park next to the Convention Center down to the waterfront, staying above Union Street. A midway station would sit between First and Second Avenues on Union, which would have to narrow from three to two lanes of traffic to accommodate the station.

• What it looks like: Eight towers would support the cable and cars, each shaped like a whalebone and taking up only three feet square on the sidewalk. The cars would travel about 40 to 50 feet above traffic, and well above the cables used by city buses.

• Who the heck is paying for it: The entire enterprise, which will cost “tens of millions of dollars,” according to Griffith, is privately funded. No taxpayer money will be used, says the elder Griffith, “and by being privately funded, there’s a strong possibility it will happen.”

Of course, from a biking perspective, this is hardly the most difficult-to-travel corridor in Seattle or even the city center. Especially once the waterfront redesign connects to Pike Place Market with a gradual, ADA-compliant pathway, bike access to downtown and the Pike-Pine corridor should be greatly enhanced compared to today.

Speaking of the waterfront, there will be events all week starting today to get updated looks at plans. 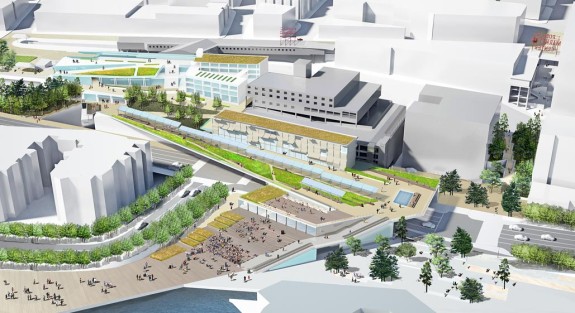 A primary driving force behind the gondola appears to be fears of losing all the car parking from under the viaduct. Since there is a lot of unused car parking near the convention center (especially during off hours), the gondola could be a way to increase car access to the waterfront without building any new parking.

So I ask you: Would you use the Union Street Gondola?

31 Responses to Bikes should fit on the proposed downtown gondola, would you use it?