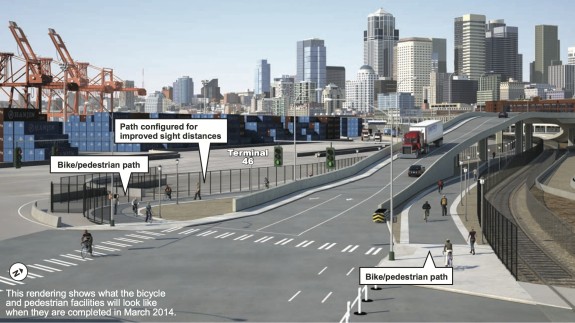 In early March, bike trail connections will open that should make the intersection easier to navigate. In the meantime, state says to be cautious.

The Washington State Department of Transportation opened a new overpass at S Atlantic Street to help people bypass a sometimes frustrating railroad crossing near Alaskan Way S. But people on bikes were met with frustration and confusion when the overpass opened last week.

The biggest issue is that the northbound bike lane on Alaskan Way S currently ends abruptly at the entrance to the new overpass. A planned bike path on the east side of the new overpass does not yet exist, leaving people to figure out how to safely access the waterfront trail.

Seattle Bike Blog commenters documented some of this confusion, and WSDOT officials were reading. Genevieve Stokes, communications officer for the Alaskan Way Viaduct Project, said the state has made some changes to how people on bikes move through the area.

“After we opened the overpass, we got some feedback from a few different bicyclists on how we could make it clearer,” she said. “We’ve added some pylons, and more clearly indicate how bikers should cross the street.”

Basically, when you cross the intersection in the northbound bike lane, you are supposed to wait at the northeast corner and use the walk signal to access the trail.

“I know it’s not an idea situation for bicyclists to have to cross in a pedestrian crosswalk,” said Stokes, but “a much better solution is coming soon.” 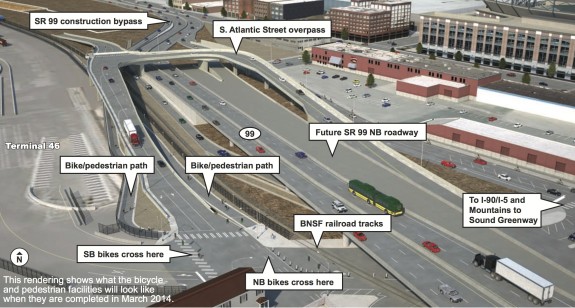 How the whole area will look when (if) the Hwy 99 tunnel opens.

On Monday, Jan. 27, the Washington State Department of Transportation opened the South Atlantic Street overpass to the west of Seattle’s stadiums. This changed access to the existing bicycle path west of the new overpass. We are continuing to work with the bicycle community to maximize safety in this area.

Safety is a top concern for WSDOT, and we want to remind bicycle commuters that this area is still an active construction zone and a busy freight corridor. Caution should be taken when traveling through the intersection of South Atlantic Street and Alaskan Way South. Bicyclists traveling northbound must cross South Atlantic Street to the northeast corner of the intersection. From there, they must use the signalized pedestrian crosswalk to travel west and connect with the bicycle path.

After observing the traffic flow at this intersection and receiving feedback from bicycle commuters, we have made several adjustments to the bicycle route. We added candlestick barriers to clearly delineate the path and numerous signs to indicate the detour route. We will continue to monitor the area and make further adjustments as necessary.

A new permanent connection (PDF) between the on-street bike lanes south of South Atlantic Street and the shared-use path from South King Street is scheduled to open by early March 2014.

We appreciate the patience and feedback of the bicycle community as we work to complete this vital bicycle route. Please contact us via email ([email protected]) or call our hotline (1-888-AWV-LINE) if you have questions, concerns or suggestions.

UPDATE 2/5: After issues continued, WSDOT announced more changes and a planned meeting to discuss the area:

We will continue to monitor the area and make further adjustments as necessary. Keep an eye on our bicycle/pedestrian webpage for shared-use path updates and advisories.

Join us at Milepost 31 from 6 to 6:30 p.m. on Thursday, Feb. 6 to talk to about the current and future configurations of the bicycle/pedestrian path in this area.

More info on the project: