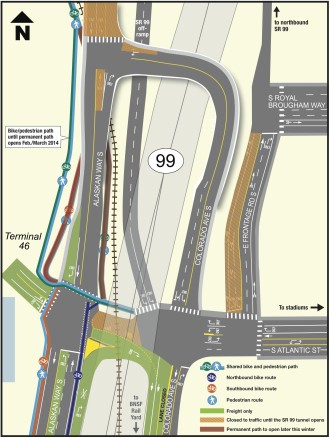 The bike route for people trying to navigate the Highway 99 construction area in Sodo and downtown has a habit of changing on a regular basis. Get ready for another big change Monday as WSDOT opens the new Atlantic Street Overpass.

You will also be able to get around a train blocking Atlantic Street by using the new overpass (sidewalks may not be ready as of Monday), which is pretty cool if you work in Sodo.

Later this winter, a new trail that goes underneath the overpass will open. Looking at the map to the right, however, I shudder to think of how dangerous this area will be when the on- and off-ramps for the Hwy 99 tunnel open. The Atlantic/Hwy 99/Colorado Ave/Frontage Rd intersection is massive and crazy.

Perhaps avoiding this mess is another argument for cancelling the tunnel. The new overpass is a good idea, and much-needed for freight movement. But I find it hard to believe the tunnel opening is going to help traffic in this area.

More details on the changes, from WSDOT:

History has shown that it can take a few days for drivers to adjust to changes in their usual travel routes. Vehicles approaching South Atlantic Street from the western leg of the overpass will need to cross the bicycle/pedestrian path. That includes freight turning right into the Port of Seattle’s Terminal 46. Please use extra caution and be mindful of traffic as you approach this intersection. Signs on the overpass will warn truck drivers of bicyclist and pedestrian crossings; similar signs on the bike path will warn of truck crossings at the intersection.

A map of the new overpass is attached to this email. Below is some key information about the new road configuration:

·         Truckers can use new freight-only lanes on northbound East Marginal Way South and eastbound South Atlantic Street to get to the new north entrance to the BNSF rail yard on Colorado Avenue South.

Future improvements to the bicycle/pedestrian path

Scheduled to open later this winter, a significant feature of the new permanent path is a changed alignment that will improve sight distance between bicyclists and trucks at the western leg of the overpass. Final design for the new path was completed with input from stakeholders to ensure bicyclists and pedestrians have safe access between West Seattle, SODO and downtown neighborhoods.

Features of the new path will include:

·         Completion of the link between the new path from South King Street and the on-street bike lanes south of South Atlantic Street.