We can do better things with our new downtown tunnel 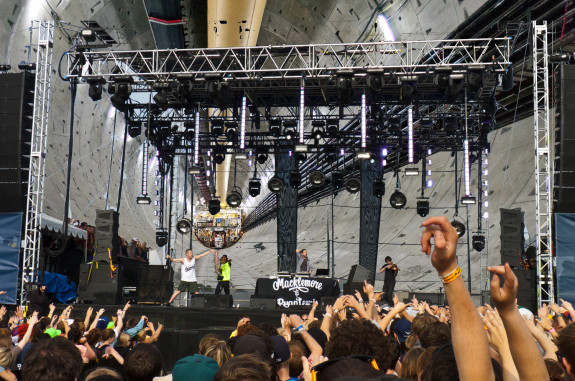 An underground concert venue would be way cooler than a car tunnel. Source photos from WSDOT and Chris Dube

WSDOT was able to bore a little further than 1,000 feet before Bertha ground to a halt, 60 feet below downtown Seattle. That was December 6.

A month and three weeks later, the tunnel boring machine has not moved an inch. That got me thinking: Maybe this is a blessing. Since it’s pretty much certain that this project will go way over it’s $2 billion budget (that’s just the tunnel portion, not the waterfront and viaduct removal part), maybe this is a chance for us to take a step back and reassess our options. How much is this tunnel really worth to us? After all, we haven’t spent all our money yet. If we stop now, we can cut our losses.

And hey, all is not lost. We’ll have a space 54 feet wide and 1,000 feet long under downtown. That actually sounds like a totally awesome opportunity for a fantastic and perhaps even iconic urban space.

How amazing would it be to have a truly underground concert venue (see photo above)? Or how about a museum or events center? The new Seattle Underground right next door to the old one. Maybe the extra revenue from tourism draw and door prices could even pay the state back for some or all of what it has already spent on the project?

And they have spent a lot, both in terms of cash and in terms of physical risk to workers. Crews have lowered a worker from the surface down a vertical shaft to the front of the machine and sent workers into an air-pressurized bubble inside the front of the cutter head. In order to do this, they had to pump thousands of gallons of water out of the city’s water table to lower the level below the boring machine. This likely caused the still-used viaduct to sink a fraction of an inch.

From all this, we have learned that the machine hit a steel pipe that was put there by state crews and then apparently forgotten. It also hit some plastic, and it hit a boulder 3.5 feet in diameter. While it can handle boulders bigger and smaller, 3.5 feet is its Achilles heel.

The state will not discuss how much this delay has cost, but it is pretty hard to imagine the project is still on budget. And even if they get the machine moving again, it has 9,000 feet to go. I wonder if there are any more 3.5-foot boulders in its path.

It is perfectly reasonable, to stop now and rethink this tunnel. As cost overruns loom, we need to figure out whether the supposed economic benefit of the tunnel will ever catch up to it’s rising price tag. If not, let’s make lemonade from this $2 billion lemon.

Founder and Editor of Seattle Bike Blog.
View all posts by Tom Fucoloro →
This entry was posted in news and tagged bertha, deep bore tunnel, sr 99. Bookmark the permalink.