After far too many injured and killed on 35th Ave SW, petition requests changes 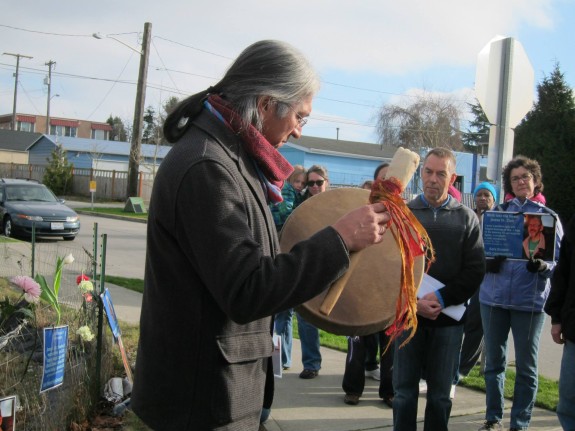 Photo from Seattle Neighborhood Greenways: Gene Tagaban of the Tlingit Raven-Coho tribe plays a song for paddlers facing an important but difficult challenge at the site where James St. Clair was hit

After far too many people — on foot, on bike, on motorcycles and in cars — have been injured or killed on 35th Ave SW, neighbors have had enough. The street is too dangerous, and its highway-style design leads to speeding and makes it difficult to navigate safely. It’s far past time for a safety update, and that’s why West Seattle Greenways, the High Point Community Association, West Seattle Bike Connections and other West Seattle residents are circulating a petition requesting action from Mayor Ed Murray and the City Council.

You can read more about the recent heartbreak felt by friends and family or James St. Clair in our previous post. West Seattle Blog has also reported on other heartbreaks in recent years due to collisions on the street.

People often refer to traffic collisions as “accidents,” but allowing a dangerous street to remain dangerous is not an accident. The city knows how to make 35th Ave SW safer, but it has so far refrained from doing so. Hopefully James St. Clair will be the last person who needs to die on the street before the city finally takes action.

Below is the text of the petition. You can sign it online at change.org.

Make 35th Ave SW safer for everyone in 2014 by investing in safety improvements.

It does not have to be this way. One promising solution that has proven effective and positive around Seattle would be to re-stripe the roadway. Re-striping the road would make it safer for everyone. Including a center turn lane would allow drivers to safely wait to make turns. Through-traffic lanes in each direction would no longer need to stop for vehicles turning left. People walking and biking would be safer when crossing the road and waiting for the bus. While safety is of paramount importance, professional studies have shown that Seattle’s re-striping projects have not had a negative impact on the flow of traffic.

The Seattle Department of Transportation with support from the Mayor and City Council has the power to make rapid improvements as they did in the case of the NE 75th St tragedy. The people of West Seattle deserve the same kind of rapid safety improvements, and the family of James St. Clair deserves something positive to come from this terrible tragedy. The niece of James St. Clair said “I hope and pray that my uncle’s death was not in vain…this that happened to my uncle will help make those changes that need to desperately be brought to this neighborhood.”

West Seattle cannot wait any longer – we need safe streets now! We the undersigned ask the Mayor, City Council, and Seattle Department of Transportation to fund and construct rapid improvements as they did in the case of the NE 75th St tragedy. Thank you,

5 Responses to After far too many injured and killed on 35th Ave SW, petition requests changes