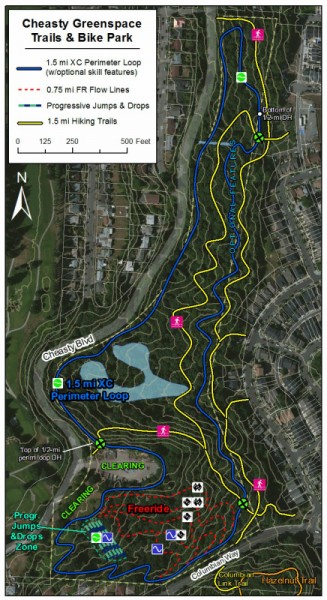 An exciting park restoration and mountain bike project in the Cheasty Greenspace on the eastern edge of Beacon Hill hit a roadblock last year: There is a long-forgotten Seattle Parks policy that prohibits bicycle use in parks.

At first, organizers of the Cheasty Greenspace Trails and Bike Park were hoping to overturn the policy, but there were concerns about making such a change in whole. Instead, the Parks Board will consider allowing the Cheasty project as a pilot, demonstrating how mountain bikers can help rehab and maintain the often under-used space.

UPDATE: The issue passed Thursday, giving the green light for the project to move forward. From organizers:

It’s on!!!! The Parks board recommended Cheasty as a pilot project for mountain biking in Seattle Parks, so it’s happening! It would have never happened without your support, enthusiasm, and dedication. So thank you all!

Back to original story:

Cheasty has a serious problem with invasive species and has few easy paths and trails, whether on foot or bike. The plan would focus volunteer hours on creating sustainable hiking trails, mountain bike trails and restoring the greenery.

If approved, it would also be a test to see how mountain bike trails, and the volunteer efforts they can draw, could be a solution for some other underused or invasive-filled areas. It would also be a good step to finding a way to balance acknowledging mountain biking as a legitimate and valuable park use while also making sure it does not diminish the parks for others (safe for dog walkers, strolls, children, etc).

As you know, we, The Friends of Cheasty Greespace/Mt.View have been on quite the journey with the City and Seattle Parks since submitting our rather dynamic proposal for use of the Rainier Valley’s largest contiguous forest for the 2013 Levy Opportunity’s Fund.  Our Opportunity Fund proposal was not funded due to an outdated Bike-Use Policy that prohibited bikes in natural areas.  Due to our unprecedented amount of support for introducing a new user group (mountain biking) to this space as well as removing barriers of privilege and access to both Nature and this sport, Seattle Parks formed a mountain bike task force this past summer to evaluate both the policy and possibilities of urban mountain biking in Seattle’s greenspaces.

In November, Parks presented a policy-change to the Seattle Parks Board of Commissioners, who requested a pilot/demonstration project for this sort of recreational use before signing off on a broad-base policy change that could allow mountain biking on designed trails in designated parks.  We have continued to work with executive Seattle Parks staff on this model and tonight they will be presenting to the Board that Cheasty Greenspace be considered as the perfect primary location for a demonstration project that involves both mountain biking trails and pedestrian walking/hiking trails.  This meeting will be held at 6:00pm tonight at Parks Headquarters 100 Dexter Ave N, Seattle, WA 98109.  This is a public meeting and you are more than welcome and invited to come and show your support!

This is very exciting to have this kind of support now from Seattle Parks for this kind of use in Parks lands, specifically in a community where daily access to nature in variable ways could transform the health and wellness of our children, youth and families.

Here’s the memo from Parks staff to the Board:

Founder and Editor of Seattle Bike Blog.
View all posts by Tom Fucoloro →
This entry was posted in news and tagged beacon bike park, board of parks commissioners, cheasty greenspace. Bookmark the permalink.

9 Responses to Rather than change Parks policy, Board will consider Cheasty pilot MTB project – UPDATE: Passed