What do you think of Cascade’s new logo? 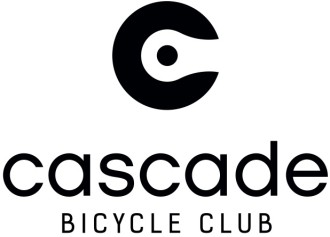 Cascade Bicycle Club has unveiled a new logo for the new year.

Finally bidding farewell to the long-running, sans-serif-in-italics logo. The new logo has a more corporate and clean look featuring a “C” wrapped around half a chain link.

The logo change comes amid a string of changes at the club since Elizabeth Kiker took control of the organization in September.

“This clean, clear and effective new logo will help us communicate with members, volunteers and partners in the Puget Sound region,” said Elizabeth Kiker, executive director. “When people see the bold C and chain link, they will immediately connect it to the Cascade Bicycle Club.”

“The designers captured our bold vision and our commitment to the community with the new logo,” said Anne-Marije Rook, Director of Communications.“Kotis has been a valuable partner for many years and they understand the Club and our mission. We’re proud and excited to start 2014 with a new look.”

Here are their past logos:

23 Responses to What do you think of Cascade’s new logo?