From a city survey. Results in this graph are limited to people with access to a working bike

At the top of the list of reasons Seattleites do not bike more: Safety concerns, mostly pertaining to fears of traffic or fear of riding without safe bike lanes.

The annual survey results were released as the City Council is debating the Bike Master Plan, which places safety as its top priority. The Council is holding a public hearing on the plan tonight (Wednesday), starting at 5:30 p.m. at City Hall. 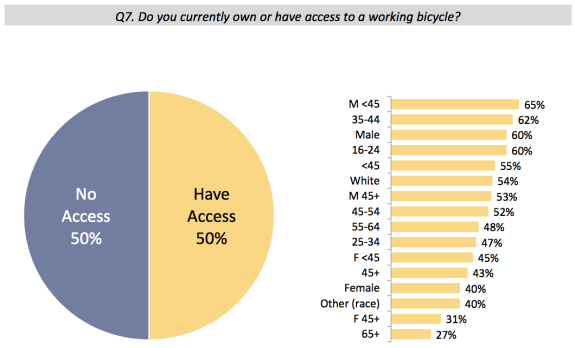 The survey shows that lack of access to a working bicycle is the biggest reason people in Seattle do not bike. Most people who have access to a bike ride it regularly, but a full half of Seattle adults does not have access to one. Bike access in Seattle is skewed toward white men younger than 55.

The bike plan includes strategies to widen the appeal and availability of bicycling, with safe bike routes in every neighborhood and a specific emphasis on improving safety and access in underserved areas.

The upcoming launch of Puget Sound Bike Share could also be an opportunity to dramatically increase access to bikes for more residents.

Other interesting notes from the survey: The most common place to bike is on arterial streets with bike lanes (37%), followed by neighborhood streets (33%), followed by trails (25%). Most bicycle trips were less than five miles in length, a very encouraging stat considering that half of all trips made in US metro areas are fewer than three miles long. Once more Seattle residents take up bicycling, they will find most of their trips within the range of an easy bike ride.

It’s also worth noting that in previous years, the survey team only called landlines. This year, they added cell phones to the mix. So some of the year-to-year changes might represent a change in the sample as much a change in bike use.

Below is the full survey report. You can also download the crosstab data from the SDOT website.

Founder and Editor of Seattle Bike Blog.
View all posts by Tom Fucoloro →
This entry was posted in news and tagged Bicycle Participation Phone Survey, sdot, surveys. Bookmark the permalink.