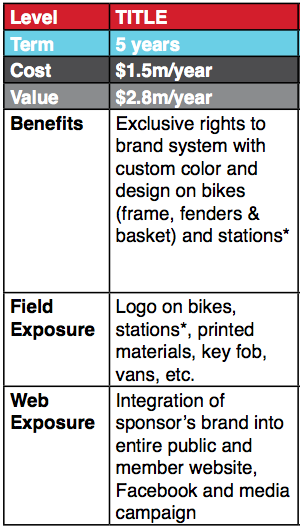 Simply put, there’s a good chance a marketing opportunity as good as Puget Sound Bike Share will never be seen in Seattle or King County again.

For a few million dollars, your company’s name will become a part of thousands of people’s daily lives.

Sponsoring the upcoming bike share is not just about the eyeballs that will see the 500 (and growing) bikes with your brand emblazoned on them. That alone is valued at $2.8 million per year, almost double the investment.

A bike share system is a new public transport system. It is something people will use every day of their lives to make short trips to the store or to easily connect to buses and trains leading all over the region. Bike share bikes will turn the heads of everyone who sees them. Visitors and tourists will go home talking about them as a highlight of their trip to Seattle.

Sponsoring bike share is a way to enter the core ethos of the Seattle region. It’s hard to put a dollar value on that, but it’s definitely worth a whole lot more than $1.5 million a year.

But don’t take my word for it. Here’s a quote from a CitiBank marketing manager:

“People are talking about and sharing the program in such a positive way.  These kinds of opportunities for a brand don’t come by every day.” – Elyssa Gray, Head of Creative & Media, CitiBank

In fact, in the months following the launch of New York City’s CitiBike program (which cost the bank $41 million, much more than Puget Sound Bike Share is seeking), public opinion of CitiBank improved 16 percent in Brand Asset Valuator’s “Cares for Customers” category, and 14 percent in “trustworthiness.” That’s CitiBank, in a city where Occupy Wall Street was born. If bike share can improve their brand recognition, imagine what it would do for a brand people actually like!

Seattle is full of great companies looking to invest in the city. The central city population continues to grow every year, and more and more people are looking for ways to get to the growing number of jobs and destinations, a huge number of which will be within the reach of Puget Sound Bike Share.

Here are some numbers from a recent Downtown Seattle Association report:

Puget Sound Bike Share will also launch in the University District, where residents, staff, professors and the UW’s more than 42,000 students will find your brand’s bikes to be the best way to get around campus and to nearby businesses and destinations. 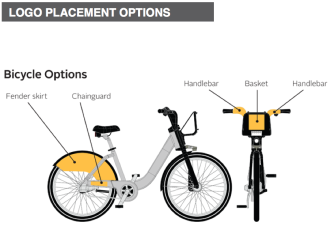 If no major sponsor steps forward, there is also the chance for three companies to sign on as presenting sponsors. This means the brand will be presented on the fender or on the front of the basket on every bike. The cost is about a third of the sponsorship option (about $500K per year).

Under the presenting sponsor concept, the branding of the system itself would be decided with the help of input from the community (though Director Holly Houser said recently it will very likely NOT be called “Puget Sound Bike Share”). Examples of this include Boston’s Hubway, Minneapolis’s Nice Ride and Chicago’s Divvy.

But companies must act fast. The deadline for a system sponsorship is nearing fast. In the coming months, Puget Sound Bike Share needs to figure out whether they will have a sponsored or unsponsored brand and, perhaps more importantly, the scale of the initial launch.

Without adequate sponsorships, there’s a chance that the system will have to be dramatically reduced in scale. As the Stranger’s Cienna Madrid reports, that means only launching in South Lake Union and the University District, areas that already have secured grant funding.

Instead of 50 stations with 500 bikes, the system launch would have to be cut down to 29 stations and 290 bikes. But worse, it would miss some of the most vital and central areas for Seattle employment and transit.

So what do you say, King County businesses? Who is going to become a historic and fun part of our daily transportation system?

Citbike Debuts in NYC from Streetfilms on Vimeo.