Pucher: Seattle should work to regain prominence as a cycling-friendly city 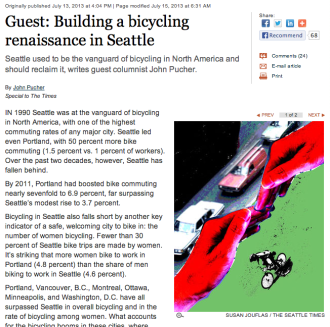 Back when Nirvana’s Nevermind dropped in 1990, Seattle suddenly became the musical focus of the nation. But perhaps not everyone realized that the city also had the highest bike commuting rate of any large city in the Pacific Northwest. Yes, even higher and Portland and Vancouver, B.C.

But now, with those two cities accelerating past Seattle—especially in the past decade—Seattle is long past due to catch up.

Rutgers professor and “City Cycling” author John Pucher was in town for June’s Bicycle Urbanism Symposium, and has written a second editorial for the Seattle Times. The path to Seattle’s next bicycle renaissance is clear: Build bike facilities that feel safe for people of all ages and abilities. From the editorial:

Bicycling in Seattle also falls short by another key indicator of a safe, welcoming city to bike in: the number of women bicycling. Fewer than 30 percent of Seattle bike trips are made by women. It’s striking that more women bike to work in Portland (4.8 percent) than the share of men biking to work in Seattle (4.6 percent).

Portland, Vancouver, B.C., Montreal, Ottawa, Minneapolis, and Washington, D.C. have all surpassed Seattle in overall bicycling and in the rate of bicycling among women. What accounts for the bicycling booms in these cities, where environments are at least as challenging as Seattle’s?

The answer is simple: Other cities are building integrated networks of neighborhood greenways and protected bike lanes separated from car traffic.

Founder and Editor of Seattle Bike Blog.
View all posts by Tom Fucoloro →
This entry was posted in news and tagged john pucher, seattle times. Bookmark the permalink.

31 Responses to Pucher: Seattle should work to regain prominence as a cycling-friendly city