In 1990, Seattle topped Portland and nearly every other US city in bike commuting 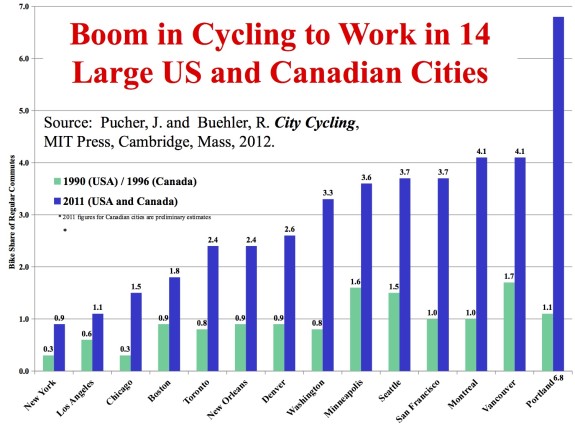 From a presentation by John Pucher

Here’s a stat that should light a fire under the exhaustively-slow Seattle process that has delayed so many needed bicycle safety and access work: Seattle used to be at the very top of cycle commuting in the US and Canada.

Today, while the city still holds a high spot, it is drifting further into the pack as other cities grow their biking rates far faster than the Emerald City’s steady increase.

The percentage* of people cycling to work as their primary mode of transportation in Seattle has grown from 1.5 percent in 1990 to 3.7 percent today (data from Census surveys). That 1.5 percent, while small, put Seattle at the top of the list with only Minneapolis achieving similar levels. And, notably for those keeping score at home, it was higher than Portland’s 1.1 percent.

Today, Seattle’s 3.7 percent is a little more than half of Portland’s 6.8 percent. Meanwhile, cities around the world have grown their cycling numbers at a rate so fast that they make Portland look like Omaha (sorry for the burn Omaha fans). For example, Sevilla in Spain went from less than 1 percent bike mode share to 7 percent in just five years leading up to 2011. They achieved the same growth as Portland in less than a quarter of the time by building an ambitious network of protected bike lanes. Passing Seattle’s bike mode share felt like a small bump in the cycle path for Sevilla.

So what’s the lesson in all this? As John Pucher (Rutgers professor and co-author of City Cycling) wrote in a recent email to Seattle cycling leaders, this should serve as both a wake-up call to Seattle politicians and evidence that rapid increases are possible and maybe even assured so long as the city makes world-class changes to its streets:

That is a truly stunning reversal.  From the nation’s leader in cycling, Seattle has fallen behind many other cities in North America.  I certain hope that Seattle implements the right policies in the coming years to catch up.  Otherwise, Seattle will fall further and further behind its main competitors, not just in the world of cycling, but also in terms of its overall livability and regional economic competitiveness.

Thanks for anything and everything you can do to get the policies and programs implemented to turn around this tragic decline in cycling in Seattle relative to other cities in North America.  From the leader in North American cycling, Seattle is now in the unfortunately position of being left behind by the vastly superior cycling infrastructure and programs in Vancouver and Portland.

I hope this is a WAKE UP CALL to Seattle to actually gets this implemented on the ground and start moving forward on the right path, not in ten years but NOW.  Good luck.

Below is Pucher’s fact-packed presentation he used at the recent Bicycle Urbanism Symposium at the UW:

* Census Caveat: The Census’ American Communities Survey has several flaws in measuring biking rates. For one, people are asked via a phone survey to tell surveyors which mode they used most for commuting in the past week. If you combine biking and transit, but most of your trip’s distance was on transit, then you would not count as a bike commuter. If you only bike to work some days, you would also not count. And, of course, the data in no way considers all the other trips people make on bike (to the grocery store, the park, a friend’s house, out to eat, etc). So it is safe to assume that these numbers are a low-end estimate of cycling rates.

Founder and Editor of Seattle Bike Blog.
View all posts by Tom Fucoloro →
This entry was posted in news and tagged commuting, john pucher, portland. Bookmark the permalink.

25 Responses to In 1990, Seattle topped Portland and nearly every other US city in bike commuting