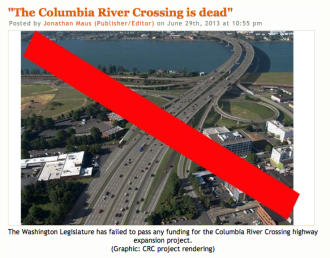 Headline and image at Bike Portland

Though the State House of Representatives was able to pass a $10 billion transportation package late last week, the Senate decided to adjourn without considering the bill.

The headlines in Portland are all about the CRC. The Washington legislature’s failure to approve funding for the massive Columbia River Crossing I-5 expansion between Vancouver, Wash. and Portland has killed that project after many years of fighting. This is a big moment for Portland’s anti-highway expansion activists.

The Oregon legislature had approved funding to move the project forward, but that funding was dependent on a Washington funding package. Without Washington’s funds, governors in both states announced over the weekend that the project is being shut down.

But here in Washington, the mood is more grim. Frustratingly, law changes that would have allowed local governments more funding options for transit service went down in flames with the same bill. So did a proposed $323 million for biking, walking, complete streets and Safe Routes to School.

For state biking and walking groups, there was definitely support for the package. But that support was hardly unanimous. $300+ million in a $10 billion package was just not enough sugar to help the bill go down for some.

What’s insanely frustrating, however, is that the legislature could not even pass a law that would allow local communities to save their own transit service. It makes some sense for state spending on road repair, highway expansions, transit, and biking and walking projects to go down together in the same bill. That’s how transportation packages work. But it makes no sense that a bill giving local communities the option to pay for transit on their own would go down with it. If King County residents want to tax themselves to prevent cuts to the transit service they need, what’s it to the state legislature?

Or, again, to put it in the Stranger’s words:

This is, frankly, totally fucking outrageous. King County did everything the state asked us to do. We found savings, we streamlined service, we negotiated concessions with unions, and we raised fares four years straight. When the state imposed an insulting two-thirds supermajority requirement for passing a two-year car tab in order to get us through until a permanent funding solution could be found, we even managed the bipartisan support to do that. Then King County executive Dow Constantine got together with the mayors of the cities, and together developed a funding solution that would work for everyone. We didn’t ask for money. No, together, the cities and the county went to Olympia with a simple request: Allow us to levy a 1.5 percent local MVET in order to fund bus service and road maintenance.

And the state senate just told us to fuck off.