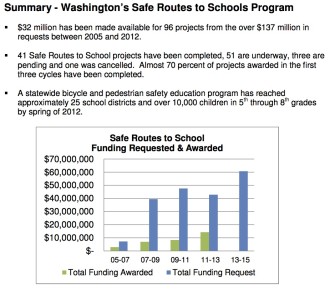 From a SRTS document (posted in full below)

Had the state legislature passed a proposed transportation package this session, it would likely have included millions of dollars in additional funding for the Safe Routes to School program, which focuses road safety investments near Washington schools. While the ill-fated package was controversial, the data shows that investing in Safe Routes to School is remarkably and undeniably effective.

In fact, the Bicycle Alliance of Washington recently pointed out a December 2012 document with this incredible fact: There had been zero reported collisions at Safe Routes to School project locations. Zero.

And yet, the rate of funding projects remains below 25 percent. There are few government programs this effective, and the state should do whatever it can to fully fund such wise investments in road safety. Imagine if the state had the goal of zero dangerous streets near schools within five years? We could do it, all we need is the leadership to make it happen.

Founder and Editor of Seattle Bike Blog.
View all posts by Tom Fucoloro →
This entry was posted in news and tagged 2014 legislature, safe routes to school. Bookmark the permalink.