We are failing our kids: A look at Seattle’s terrifyingly normal streets 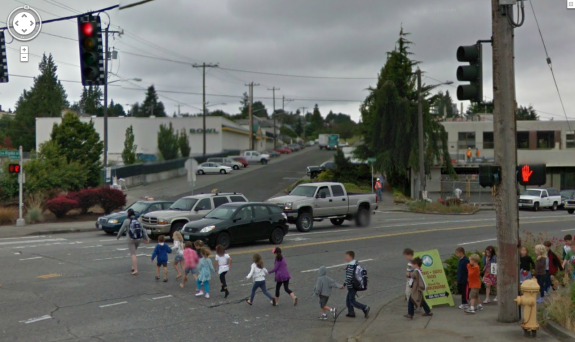 I was poking around Google Maps over the weekend when I stumbled on a Street View scene that made me stop in my tracks. This group of kids, holding hands, escorted by two adults have to run to make sure they can get across the five lanes of Fauntleroy Way SW at SW Alaska Street in West Seattle.

The red hand is already flashing, the countdown at 12 and the first kids have not even reached the double yellow line yet. There’s no way to know how many of them make it across in the first signal. Are the stragglers still in the street when the light turns green? Are the drivers waiting patient, or do they give a little engine rev to tell them to hurry up? We don’t know because this is the last image from this day in July 2011 that Street View shows.

But that’s beside the point, because this image is incredibly, frustratingly and terrifyingly normal.

By default, streets in Seattle completely fail our children. When Fauntleroy was engineered some time ago to have five lanes where it crosses Alaska, the child crossing the street was forgotten at best or ignored at worst. Same goes for many, many busy intersections across the city. From curb to far distant curb, there is no safe space for people. You hold-your-breath, cross your fingers and hope every single person at the intersection is both sober and paying attention.

In fact, there is a reason this scene jumped out at me: A Greenwood seven-year-old girl’s dance with death was fresh on my mind. She was walking to school at Broadview-Thomson K-8 with her mom Friday morning when an apparently reckless man behind the wheel struck her and her mother while they crossed the street in a crosswalk at 130th and Greenwood.

After the man struck her, he continued driving, carrying the child 30 feet on the hood of the car before throwing her another 15 feet to the ground, bleeding and bruised. He kept driving and left the scene, but police were able to locate him. Amazingly, the girl did not appear to have serious injuries beyond nasty bumps and scrapes. Her mother was also not seriously injured.

So what does the street look like at 130th and Greenwood? Terrifyingly normal: 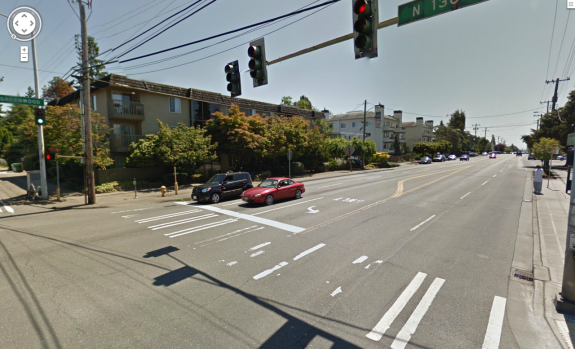 36 Responses to We are failing our kids: A look at Seattle’s terrifyingly normal streets