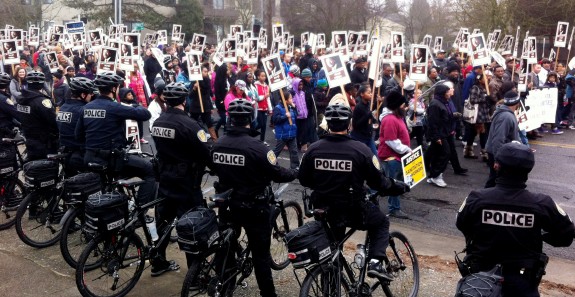 A column of bike cops at the 2013 MLK Day march

There was a time not long ago when one of the most prominent images of urban cycling in Seattle was one of social rebellion. Once much larger than today, Critical Mass drew cheers and scorn alike. Ultra-low-budget bike repair co-ops taught people how to wrench their rusty found road bikes back into working order, and a person simply taking their space on the roads seemed a bit out-of-place.

Clearly, much of this is still true today. Taking the lane on some busy streets still often feels like a tiny revolution and bike co-ops are still teaching bike repair skills (though many more bike shops now operate in more corners of the city). But something big has changed: The Man has taken up cycling, too.

While the numbers at Seattle’s monthly Critical Mass rides have dwindled in recent years, Danny Westneat at the Seattle Times wrote a column recently noting that many of the same people who might attack Mayor McGinn for his unapologetically pro-bike stance would now be praising his handling of the May Day protestors relying almost entirely on bike cops:

Take last week. The campaign for Seattle mayor finally kicked into gear, with the first debates featuring a peloton of candidates pushing to brand lead rider Mike McGinn as bumbling and incompetent, especially when it comes to his police force.

So what happens? The May Day protests. At which Seattle police finally figured out how to handle the anarchists. Using as their secret weapons … wait for it … a bunch of bikes.

Police employed dozens of bicycles, helping direct the flow of the protests and then forming barriers with the bikes to block and sweep streets when some demonstrators got violent. Police experts said that while bikes for crowd control isn’t new, the stepped-up use of them this year was the key difference in limiting May Day property damage and injuries.

And they call him Mayor McSchwinn as if that’s a bad thing!

Now, I am certainly conflicted about the role of police in protest control, and I am posting this to neither praise nor scorn the actions of SPD during May Day. That’s a conversation for another blog (please).

Rather, if you take a step back and look at the events through a strictly bike culture lens, SPD’s liberal use of bicycles as an officer mobilizing tool and weapon is a very clear illustration that bikes have gone from being something novel on the force (“Hey look! There’s a cop on a bike!”) to being a core part of the department’s policing strategy.

In fact, there were so many officers on bikes that the number of protesters on bikes (mostly dressed as clowns) were completely overshadowed: 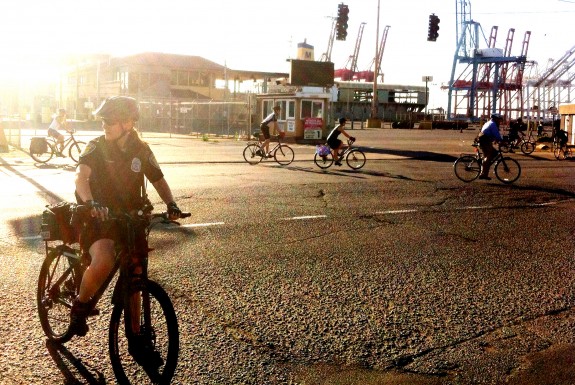 The number of officers on bikes has grown so much in recent years, it is no longer worth remarking about. Now, it’s the vintage police cruiser that has people giving a double-take.

“Victory” for participants of Critical Mass during its height meant a lot of different things to different people, and I’m sure the sight of a police officer crosschecking a May Day protester with the top bar of a militarized mountain bike is not what many people had in mind (as someone who celebrates cycling in Seattle at every opportunity, it’s certainly hard for me to see).

But if one central goal of Critical Mass was raise awareness of cycling, spread its use to more people and make it a fully normal part of Seattle life, then is the complete embrace of cycling by the police force a sign that cycling truly is a core part of our city? Or is it just a co-opting of a social revolution that is not yet finished?

11 Responses to In Seattle, cycling cops have critical mass