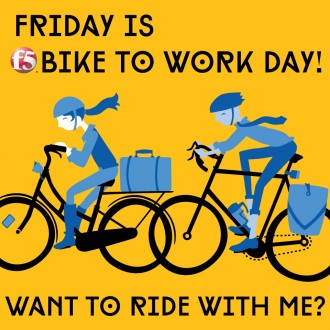 Friday is Bike to Work Day, which is basically a holiday where, for one morning, we have a chance to glimpse a few years into the future to experience what it will be like with even more people biking to work every day.

There will be Commute Stations set up all over the city (see map below), some staffed by Cascade and others independently organized. Each will be different, but expect lots of free granola bars, coffee and encouraging smiles.

The centerpiece event of the day is a morning ride from KEXP’s Dexter and Denny studio to City Hall for a rally. The ride leaves KEXP at 7:45 a.m., and the rally starts at City Hall at 8.

There will also be an after party at Velo Bike Shop’s new location in the Via6 building at 6th and Blanchard. Then there’s an after-after party at Peddler’s Brewing in Ballard, where from 5–10 p.m., anyone who shows up on a bike will get a half-price pint.

You can apparently also get a free coffee from Starbucks all day long. Just show then you got there by bike. 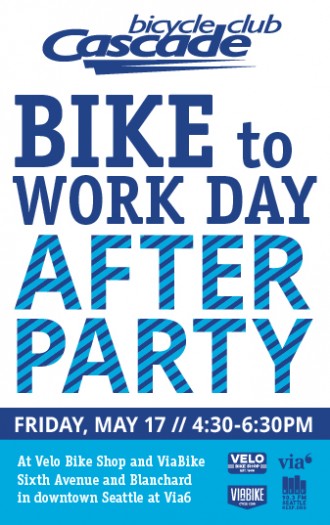 Kick off F5 Bike to Work Day by riding to Seattle City Hall with Seattle Mayor Mike McGinn and other elected officials. Stay tuned for a starting location. We’ll roll out from KEXP at 7:45 a.m. and cruise to the F5 Bike to Work Day commute station and rally at City Hall for a brief but inspiring program.

After the rally, pick up some free swag, coffee, Seattle bike maps, and information about local bicycle advocacy efforts at City Hall.