People bike out of their way to ride on them. The Kinzie bike lane saw the number of bikes more than double almost immediately. Now, bikes outnumber motor vehicles on Kinzie during rush hour. (Also, check out the bike-safe surface they installed on at least one of their steel grate bridges).

And Rahm Emanuel has plans to install hundreds of miles of them (and, don’t worry, a curmudgeon columnist already cried “War on cars!”).

The time for waiting in Seattle is over. Our downtown is unnecessarily hostile to people walking and biking (and driving!), and it is clear that street redesigns like New York City and, now, Chicago have been installing are the way to make our streets safer and more enjoyable for everyone.

We have the space, too. Second Ave is a very wide street that does not carry many more vehicles per day than Fifth (landlocked at three general lanes, compared to Second’s three general lanes plus a bus lane, a bike lane and a parking lane). Today, Second Ave is one of the worst streets to walk across on foot. The distance from curb-to-curb so big that even able-bodied people are hurried to get across once the hand starts blinking. For people with mobility issues, it’s even worse.

And, of course, Second is also home to what is widely considered to by Seattle’s worst bike lane. Between opening car doors and oblivious left turns, the lane is simply too dangerous to recommend.

Below is a video of a (relatively calm) rush hour trip down the Second Ave bike lane from earlier this autumn (notice a very young Occupy Seattle protesting at the Federal building).

Note that at just about every single red light, there is someone still stuck in the middle of the roadway when the light turns green. Sure, this happens on most downtown streets and is part of downtown walking culture, but it is more pronounced on Second because the road is so wide. A longer countdown might help some (Walking in Seattle discovered that many downtown signals are at the minimum recommended or worse), but shortening the crossing distance should be a safety priority. 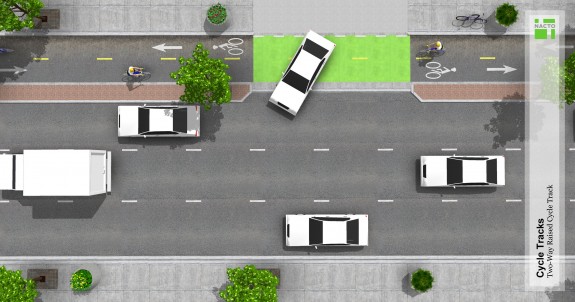 Some Seattle bikers still do not trust the idea of a protected bikeway (can be one-way or two). But we have countless examples across the country and especially around the world to learn from. The new NACTO Guide even lays out proven design standards to follow. Existing facilities are evidence that they work extraordinarily well.

Protected bikeways solve several of our downtown’s safety problems and would encourage more activity and downtown life. The city has been working to improve bike routes outside downtown in the past couple years. Now it’s time to open up downtown and see what can really happen.