Councilmember Sawant expanded what is possible in Seattle 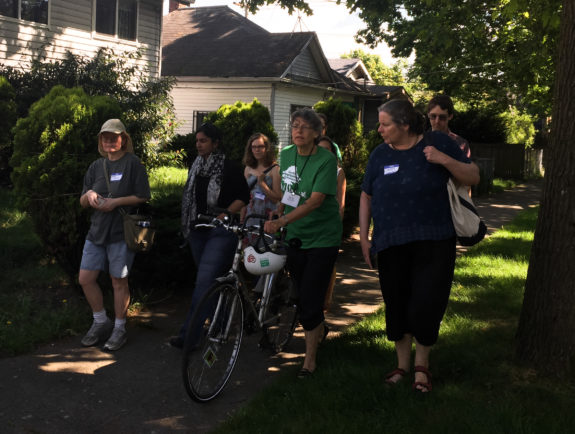 Kshama Sawant on a walk to discuss safe streets issues in 2015.

Kshama Sawant, the City of Seattle’s most tenured elected official, will not run for reelection after a decade in office.

Seattle Bike Blog has endorsed Sawant consistently since she pulled a remarkable upset to unseat Richard Conlin during the 2013 election, a seat elected citywide at the time. Despite Council terms typically being four years long, the 2023 election would have been her fifth election in just ten years thanks to the move to Council Districts in 2015 and a failed recall in 2021. Despite all these attempts to force her from office, Sawant is now stepping down on her own terms.

Sawant rarely made transportation issues her primary focus, but she was a long-term member of the Council’s Transportation Committee who was a consistent vote in favor safe streets and transit. Even though her transportation votes are not going to be the moments she is widely remembered for, her many years of support added up to make a real difference for safe streets.

But her larger and longer-lasting impact on Seattle will be the way she proved that our city was willing to vote for big changes. Her election in 2013 was probably the most impactful election in decades because it completely shook up the assumption that the voters ultimately sought change that was slow and gradual. Does the city pass a $15 minimum wage without her election? Sure, the Mayor Ed Murray version was watered down compared to what Sawant was advocating, but I doubt it would have happened without her winning. Would the city have gone as big with their funding initiatives, such as the nearly $1 billion 2015 Move Seattle Levy, if Sawant hadn’t demonstrated the population’s willingness to go big at the ballot box? What about Sound Transit 3? Big ideas that might have been considered a dream before Sawant were taken more seriously afterwards.

Her departure opens the District 3 Council race for the first time ever, which could lead to a fascinating race. This is the district that typically goes the hardest for every transportation funding initiative, for example, so there is a lot of room for a candidate with a very bold vision prioritizing walking, biking and transit.

Founder and Editor of Seattle Bike Blog.
View all posts by Tom Fucoloro →
This entry was posted in news and tagged 2023 primary, city council district 3, kshama sawant. Bookmark the permalink.

1 Response to Councilmember Sawant expanded what is possible in Seattle