Hey District 3, vote NO on the Kshama Sawant recall

This election is only open to voters who live in Seattle’s City Council District 3 (PDF map), encompassing Capitol Hill, the Central District, and some surrounding areas. If your registration is up-to-date, you should have received your ballot in the mail this week. You can check the status of your registration or update your address via the King County Elections My Voter Information website. That site also has a tab for “December 2021 Recall Election,” which will tell you if your address is included. 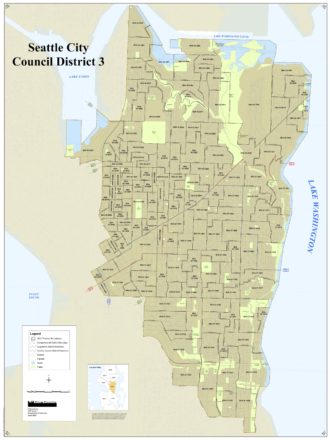 Even if you don’t like Kshama Sawant’s politics, District 3 voters should say NO to the special recall election underway now through December 7.

Recalling her would set a terrible precedent to set for our city’s elected government system. Sawant won the 2019 election, and was elected to serve a full four-year term. People who don’t like that’s she’s a socialist or whatever can support a different candidate in 2023. That’s how our city democracy works.

There is too much real work to do in our city to spend a ton of energy on mid-term recall elections like this. A recall is a BREAK GLASS IN CASE OF EMERGENCY kind of tool for when the public has no other means to prevent an elected official from further harming our city or as a response to a particularly egregious malfeasance. None of this applies to Sawant.

The supposed “charges” that form the legal basis for the recall are very flimsy. For example, she used City Hall printers to print materials supporting a Tax Amazon ballot initiative that never happened. This was not an appropriate use of public printers, but she owned up to the mistake and paid a fine. Don’t tell me you’re going to recall our most senior  Councilmember over the use of a printer. Other charges say she participated in a summer 2020 protest march that went by the Mayor’s house and she opened the City Hall doors to another protest group. I would say that supporting protests against police brutality was a good thing for a Councilmember to do, and opening the doors of City Hall to the marching public was an effective and way to make her point that our city government belongs to the people. Even if you don’t agree with her tactics, these are not reasons to recall a Councilmember.

Seattle Bike Blog has endorsed Sawant many times. She is the senior member of the Council, and she has been a consistently positive vote for biking and safe streets efforts. But again, these aren’t even the most compelling reasons to vote NO. This election is not asking whether you like her politics, it’s asking whether we need to disrupt our government and the four-year term cycle in order to cast out someone who was legitimately elected in 2019.

Additionally, it is concerning and undemocratic for the recall campaign purposefully delay submitting their signatures until after the deadline to put the issue on the higher-turnout general election ballot in November. They are hoping that fewer people vote because then they have a better chance of sidestepping the younger voters who have long been strong Sawant supporters. If they were really so concerned about harm from Sawant’s ongoing presence on Council they would have tried to get the recall onto the ballot as soon as possible. Instead, they delayed in an expensive effort to get a less democratic process. No voter should support these tactics.

This entry was posted in news and tagged city council district 3, kshama sawant. Bookmark the permalink.

25 Responses to Hey District 3, vote NO on the Kshama Sawant recall