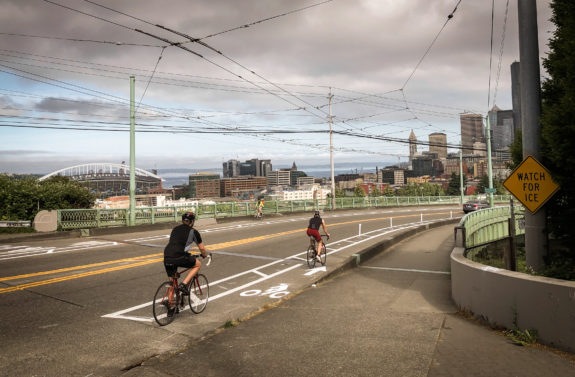 Though many of the Seattle City Council’s more ambitious budget goals were shelved following a grim revenue forecast, the nearly-complete 2023-24 budget retains the Vision Zero and Missing Link redesign funds that Mayor Bruce Harrell initially proposed and sets aside $1 million for upgrading many District 2 bike lane barriers to concrete.

Considering the budget crunch, biking and safe streets did OK through this Council budget process. Many larger project additions didn’t make it, such as Councilmember Lisa Herbold’s effort to revive the shelved Fauntleroy project, Councilmember Andrew Lewis’s effort to save the Thomas Street Redesigned project that Mayor Harrell cut, and Councilmember Tammy Morales’s Home Zone program expansion. The Council also made some frustrating cuts to the sidewalk repair program and ADA compliance in parks.

But the ill-advised bike and scooter share tax was also cut, which is a significant win considering how appealing a new potential revenue source was during an austerity budget session. However, as we argued, the revenue was far from assured, and creating the new taxing process could even have cost the city money in its first year of operation.

One of the biggest wins late in the Council’s deliberations was a Councilmember Morales proviso setting aside $1 million “solely for the replacement of plastic bollards with concrete barriers on currently protected bike lanes in Council District Two and may be spent for no other purpose” (budget action PDF). Morales tried hard to get more street safety funds into this budget, continuing to stand out as a champion for Vision Zero and equitable safety investments.

In the end, some but not all budget asks from Seattle Neighborhood Greenways and Cascade Bicycle Club made it through. You can track all the budget amendments using this very handy city website.

While not related to biking specifically, Ryan Packer at the Urbanist has sounded the alarm about a concerning move to shift $12 million in funds from Seattle’s 2020 transit funding ballot measure to fund bridge maintenance instead of transit service. They are managing this bait and switch by noting that buses also use the bridges, so it should count as a transit investment. This is not what voters thought they were voting for when an overwhelming 80% of them approved this measure. There are many pools of money available to fund bridges that are not available for transit service, such as state gas taxes. That’s why it is so important to protect transit service funds. Unfortunately, the severe bus driver shortage has been leading to King County Metro bus service cuts even as funds are available to maintain that service. So as reserves from the ballot measure built up, it became a juicy pot of cash to raid.

The City Council is scheduled to make a final vote on the budget 2 p.m. Tuesday. While they are able to make last-minute changes, approval is often more of a formality as the vast majority of debates happened in the Budget Committee.