The Westlake Bikeway’s ‘Glacial Canoes’ have eroded, and they’re not coming back

A reader on Mastodon asked the other day, “Does anyone know what happened to the big glittery pieces of art at the south end of the Westlake bike path?”

The blue and gray glittering sculptures on both sides of the Westlake Bikeway disappeared earlier this month, and I have some bad news: The Glacial Canoes are gone for good. 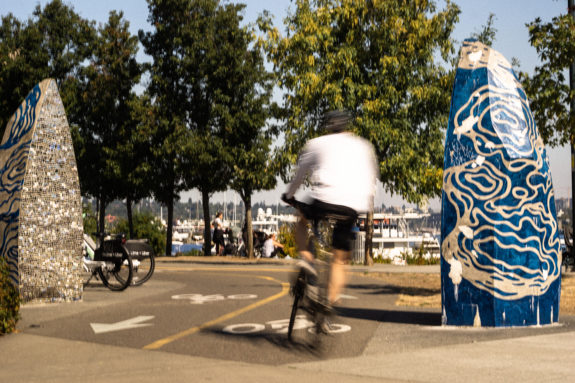 I asked SDOT about what happened to them, and they delivered the sad news that the sculptures had deteriorated and are not reparable. The pieces were part of a series of public art pieces along the bikeway that were funded by SDOT’s 1% for Art funds. The full series, created by Jennifer Dixon, is called JewelBoats, and the sculptures at the south end of the path were probably the most eye-catching elements. Called Glacial Canoes, the structures paid “homage to the glacier that formed the land and created Lake Union eons ago,” according to Dixon’s website. “The patterns on the sculptures’ backs represent the current lake and its surrounding topography. Split like a geode, Glacial Canoes’ watery insides provide an ever-changing portal for bicycles to pass through. Their basic shape refers to the history of boats and mirrors the constant motion and fluidity of the lake’s surface. Like glacial erratics, Glacial Canoes appear as displaced rocks transported by time and nature.”

I just happened to take some photos of the Glacial Canoes in mid-September, and zooming in reveals that much like an actual glacier in 2022, there was some deterioration and cracking. 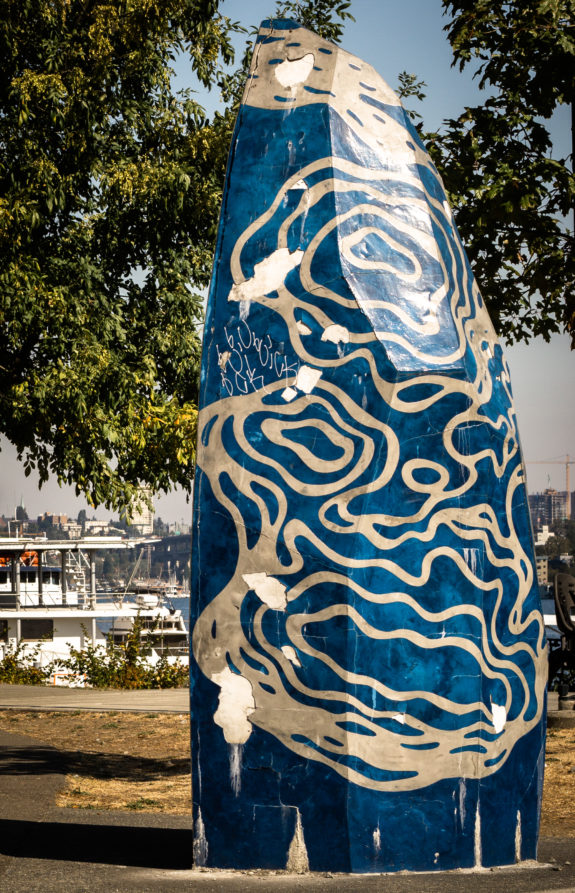 They were originally installed in 2016, so we got a good six years out of them. The bare concrete slabs where they stood feel so bare now. I hope another work can take their place.

To learn more about Dixon, the artist, check out this 2008 Seattle Channel feature:

Founder and Editor of Seattle Bike Blog.
View all posts by Tom Fucoloro →
This entry was posted in news and tagged 1% for art, glacial canoes, jennifer dixon, jewelboats, sdot, westlake. Bookmark the permalink.

2 Responses to The Westlake Bikeway’s ‘Glacial Canoes’ have eroded, and they’re not coming back