After a decade of community organizing, city will officially open the Cheasty mountain bike and hiking trails October 1 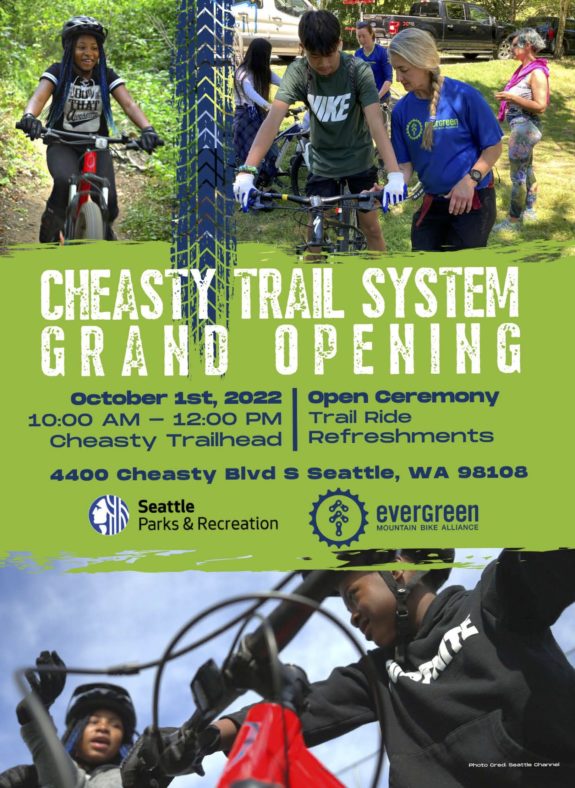 The Cheasty Mountain Bike and Pedestrian Trails project first won grant funding to clear out invasive greenery to create a recreation area between Rainier Valley and Beacon Hill in 2013, and supporters have been bushwhacking through the Seattle Process ever since.

One decade later, Seattle is finally ready to cut the ribbon on the South Loop of the trails vision, which includes paths both for mountain biking and walking. Supporters and the city will celebrate 10 a.m. October 1 as part of Take a Kid Mountain Biking Day.

The dream of this project was to create an urban mountain bike park that could expand access to the sport by creating a space that does not require a long drive to the forest. Instead, trails could be constructed within a forested hillside greenbelt within easy biking distance of southeast Seattle homes, schools and community organizations like Bike Works. In the process, trail supporters have pledged to hold volunteer work parties to help clear out invasive plants like ivy, which was a huge problem in the greenbelt that threatened the health of the trees.

But the project quickly met the first of many hurdles: Seattle Parks Department rules. Then there was political opposition to overcome, including resistance from then-City Councilmember Bruce Harrell who ultimately abstained from voting to approve its grant funding in 2014 saying, “For me, this was less than a perfect process.” The project vision shifted around this time from being mostly about mountain biking (it was originally called “Beacon Bike Park”) to also include hiking trails that could engage more of the community. Then there was an extensive environmental review process. Every step pushed the timeline further into the future. But supporters have persevered, and the trails are finally becoming reality.

The trails were built under the guidance of Evergreen Mountain Bike Alliance, which has a long history of helping to maintain trails across the state. Here’s an overly-detailed map of the South Loop design plan from the technical documents: 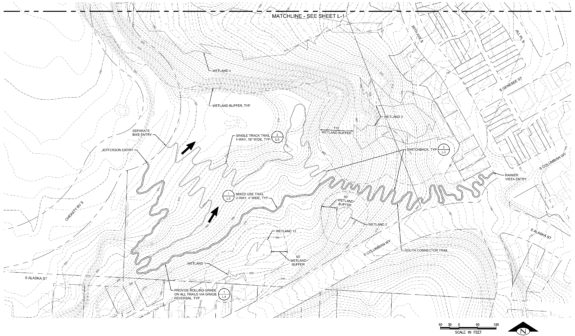 The park is set to double in size when the North Loop trails are completed. “[Parks] will be monitoring the south loop trail usage while constructing the north loop,” the city said in its press release (see below). The North Loop timeline is still listed as “TBD” on the project webpage.

Congratulations to everyone who worked on this project in the past decade, whether you attended the many, many meetings about it or whether you joined a volunteer work party in the park. Having a forested mountain bike park within a busy urban area is very rare, and this park is set to become yet another thing that makes Seattle such a special place.

Details on the celebration from Seattle Parks:

Seattle Parks and Recreation (SPR), Friends of Cheasty Greenspace at Mountain View, Evergreen Mountain Bike Alliance, and the Seattle Parks Foundation invite the community to celebrate phase one of the new Cheasty Mountain Bike and Pedestrian Trails. The celebratory event will be held on October 1, 2022, officially “Take a Kid Mountain Biking Day,” from 10 a.m. to noon, with a ribbon cutting at 10:30 a.m. Please join us at 4400 Cheasty Blvd. S 98108.

This community-initiated project created Seattle’s first forested mountain biking trails. Led by the Friends of Cheasty Greenspace at Mountain View and built under the guidance of Evergreen Mountain Bike Alliance, the trails offer new opportunities for families and neighbors to access nature through our urban park greenspaces.

The event is an opportunity for the community to come tour the south site trails and learn about the future development of the north trails. BikeWorks will be onsite providing bike repair services for free or on a sliding scale.

This three-year pilot project has been split into two phases, the south and north loops. SPR will be monitoring the south loop trail usage while constructing the north loop. SPR is collecting data on the Cheasty Pedestrian and Mountain Bike Trail to better understand trail usage and people’s experience using the trails.