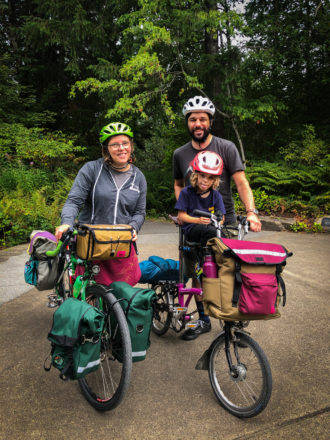 My lovely spouse Kelli carried the heavy, dense stuff while I had the tent, sleeping bags and kid. We were also so loaded down with old and new Swift Industries bags that we could have been named MOSAI: The Museum of Swift and Industries.

Like so many adventuring plans, this wasn’t how we originally saw it going. But somehow I ended up biking myself and our kid on a gravel path up mountain using a folding bike. And it was great.

The Palouse to Cascades Trail is an incredible place, and I can’t recommend it enough. This was the first time we’ve done it with the kid, which did present some additional challenges. But it was worth it.

The trail starts at Rattlesnake Lake. If you have access to a car that can carry bikes, that’s one option of getting to the start. There is a parking area for the trail, though parking can get tight because Rattlesnake Lake is so popular.

If you don’t have a car (or don’t want to use one), then you have some options. The Trailhead Direct runs weekends and holidays through September 11 this year. From the North Bend Park-and-Ride, you have an eight-mile bike ride to Rattlesnake Lake almost entirely on the wonderful Snoqualmie Valley Trail. If Trailhead Direct is not running, you can also take Metro’s Route 208 from Issaquah Transit Center to North Bend. However, the 208 has limited runs and does not run at all on Sundays. If you take the 208 and want a longer bike ride, I recommend getting off near Snoqualmie Falls, then riding to the Snoqualmie Valley Trail via Mill Pond Road. 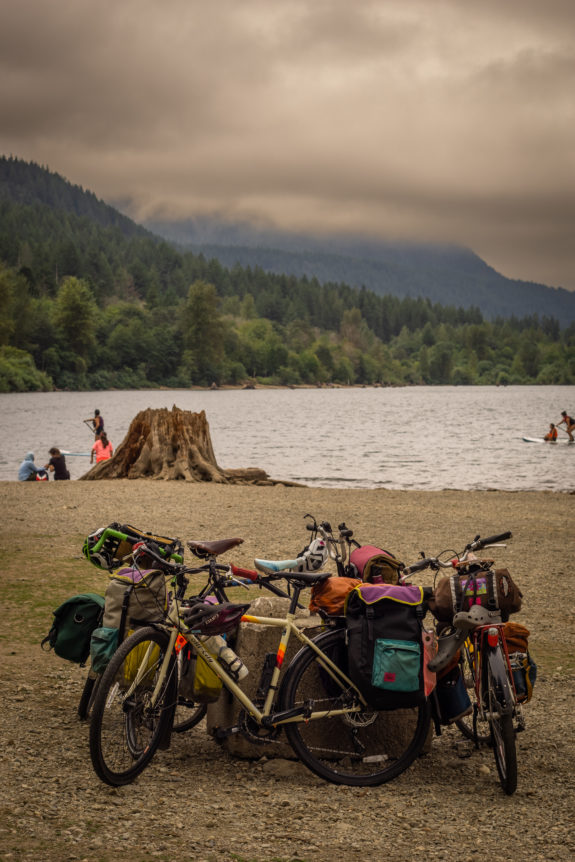 At Rattlesnake Lake before the ride.

We were initially planning on taking our full-size bikes on the Trailhead Direct, then biking up to Middle Fork Campground. But right before we left, we saw a Q13 News report that rangers had closed the campground and nearby dispersed camping areas due to bear encounters. So we switched our destination to Carter Creek Campground about 13 miles from the start of the Palouse to Cascades Trail. But then our friends decided to join, and they have a car with a bike rack for three bikes. So that’s how I ended up on the Brompton, which we folded up and stashed in the back with the rest of the camping gear.

This is the second time I’ve taken the Brompton on the Cascade to Palouse Trail, but it’s by far the most difficult ride I’ve done with a kid on it. Big thanks to Ben, a Seattle Bike Blog reader who gifted us the kid seat for the Brompton (at one point it was called the IT Chair, then it was renamed the Milian Pere). Both Fiona and I love it, and the bike still folds with it attached, which is amazing.

Carter Creek is the closer of the two really great campgrounds within a relaxed day’s ride on the trail (Alice Creek is the closest campsite to the trail start, but Carter Creek is much nicer and only 3 miles further). The excellent Cold Creek Campground is ten miles past Carter Creek (including through the 2.25-mile Snoqualmie Tunnel) and has access to Lake Keechelus. But our biggest limiting factor was the kid. Don’t let the mileage fool you, constant uphill on gravel makes 13 miles feel a lot longer. It took us several hours to bike those 13 miles, and that is a long time for a kid to be sitting on a bike. We took lots of breaks to let her run around, and we were all very satisfied when we arrived at camp. There’s a creek for water (bring a filter) and a pit toilet. Campsites are $12 per night.

After sleeping to the sound of the creek and having breakfast, we packed up and stashed our stuff in the campsite before heading out to ride to the tunnel without all our extra gear. That was very nice for everyone else, but most of my added weight was the kid, who we decided should not be left behind with the tents and stuff. The Snoqualmie Tunnel was amazing, as always. There also seemed to be less loose gravel inside than there were a few years back when I last rode through it, which is a good thing. It was a bit easier to take in the spooky space without needing to constantly watch the ground. The kid enjoyed screaming so she could hear it echo through the 1914 tunnel, which I’m sure didn’t freak out any of the other people walking and biking through. 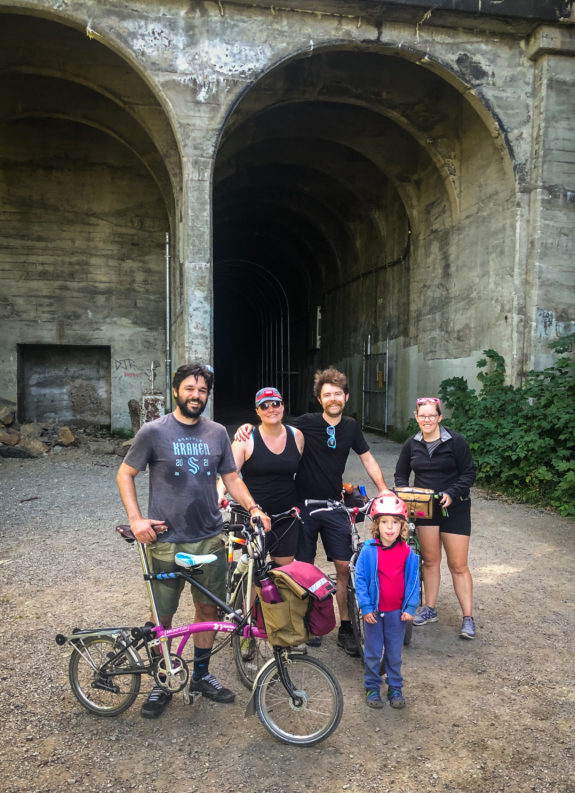 Then the ride back was pure joy. The reward for biking against gravity for a day is that all that saved up potential energy is ready to turn into kinetic energy on the ride back down to Rattlesnake Lake. We cruised back to the campsite, picked up our stuff, then continued all the way to the car with only a few short stops to take in the amazing views from the trestles.

I joked on Twitter that this trip was going to be my answer to anyone who asks whether you need a gravel bike to ride the Palouse to Cascades Trail. Sure, there are advantages to having a bike built for gravel trail riding. But you don’t need one. I had a great time on what must be one of the least-optimized bike set-ups imaginable for such a trip. Road bikes, mountain bikes, hybrid commuter bikes, they’ll all handle the trail just fine. If you can ride it around Seattle, you can definitely take it up the trail and have a great time doing so.

My new answer for whenever people ask if you need a gravel bike to ride the Palouse to Cascades Trail. #SEAbikes pic.twitter.com/jvz3JddArv