Without waiting for outer loop path due this summer, Parks Department issues ‘long-term temporary’ ban on bikes at Green Lake 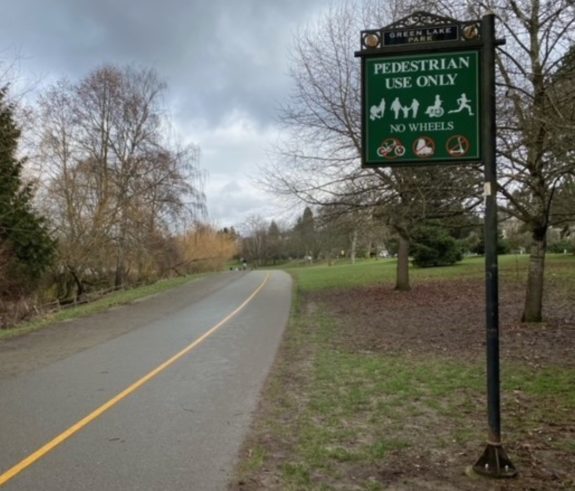 Photo from the Parks Department.

Without waiting for SDOT to complete its “outer loop” bike connection around Green Lake, the Seattle Department of Parks and Recreation banned biking from the popular lakeside trail.

“This long-term temporary use restriction, which restricts all bicycles and other wheeled uses from the Green Lake Park inner loop (strollers and mobility devices are allowed), is intended to create more space for path users on this high use trail,” wrote the Parks Department in a blog post announcing the change. But without SDOT’s planned outer path, people biking now have no comfortable option for traveling along the west side of the lake. Regardless of whatever “long-term temporary” means, signs are now in place with icons of bikes, roller skates and scooters crossed out in red. People can submit feedback on the rule change to [email protected]. 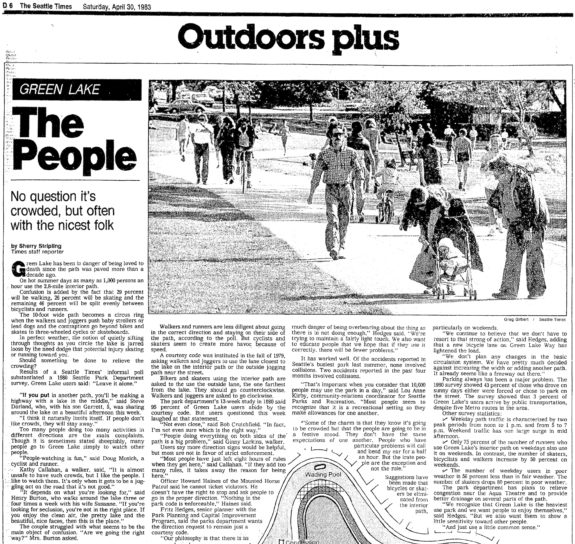 News clipping from the April 30, 1983 Seattle Times shows that people have been talking about crowding on the Green Lake Path for decades. Read the full article (Seattle Public Library card required).

There is a lot of history leading up to this point. People have argued off and on about banning biking on the path for decades. The Seattle P-I asked readers in 1979 (Seattle library card required) whether biking and roller skating should be banned from the path. The majority of respondents said no, but one reader said, “Ban everybody, I say. The public has enjoyed Green Lake long enough. One would think the public owned it.” In 1980, the Parks Department even surveyed users about whether something should be done about it. People at the time said to leave it alone, according a 1983 article in the Seattle Times.

The Green Lake path was once among the most popular destinations in the city for people looking for a nice place to bike because, just like now, many people simply did not feel comfortable mixing with car traffic on city streets. Countless young Seattleites learned to ride a bike on the path. It’s an extremely pleasant place, at least when you don’t get stuck in a big summer weekend crowd. Over the decades, there have been many efforts in the past to ease congestion on the path. The longest-lasting solution was the one in place until very recently: A divided path with foot traffic on one side and “wheels” on the other. While people on foot were allowed to go either direction, wheels were only allowed counterclockwise. This never worked perfectly, but it was a compromise.

Today, there are many places to ride a bike in Seattle other than this one path. There are even bike lanes on the street not far from the path for about two thirds of the lake. But there still is no bike route on the western edge of Green Lake, leaving the lakeside path as the only obvious and direct option for people traveling there.

Public opinion about banning bikes seems to have only slightly shifted since 1980. A recent SDOT survey (PDF) for the outer loop path project asked respondents, “If the City completed a full outer loop in the right of way with a biking path all the way around the lake, how satisfied would you be with a pedestrian only policy for the inner loop adjacent to the lake?” The responses were roughly 60% in favor and 27% opposed with the rest neutral. But the key phrase in the survey question is “if the City completed a full outer loop.” The city has not done this yet.

With the outer loop project in the design process and planned for construction “as early as mid-2022,” why didn’t Parks just wait until then? They’ve waited more than 40 years already, why not wait another six months? Parks even mentioned the outer loop project in their announcement, saying the rule change “is intended to create more space for path users on this high use trail and to provide more time for the Seattle Department of Transportation (SDOT) to complete their design process and coordinate the construction timeline for creating a complete outer loop around Green Lake with protected access for bikers and pedestrians.” How does banning bikes on the inner trail give the outer trail project more time? It does exactly the opposite.

This rule change puts a lot more pressure on SDOT to complete the outer loop on schedule. We need that path as soon as possible, because now there is no legal way to bike along the west side of the lake without crossing a particularly fast and dangerous stretch of Aurora.

A more sensible approach by Parks would have been to wait until the outer path opened, then observe how usage of the inner path changes. This is what happened when the city first painted a bike lane on Green Lake Drive. In the 1983, Fritz Hedges—an incredible name for a Parks Department planner—told the Times that the then-recent painting of the bike lanes on the adjacent street had relieved a lot of the pressure on the lakeside path. Maybe a complete outer loop will do the same, and no rule change would be needed.

People will still bike on the Green Lake path, and they will certainly keep roller skating (there are not a lot of roller skating options in this town). Maybe they are kids (who really should be exempted from this rule), or maybe they are people looking for a friend’s picnic spot or maybe they are people who are just out for a ride who see a nice path far from cars and decide to ride on it. For much of the year (and during the night), there’s plenty of space for wheels to operate safely. It’s a public park, and people will go wherever seems nice. Sure, this may lead to moments of congestion, but is it inherently and completely a bad thing?

Parks is unnecessarily introducing friction into an otherwise carefree public space. The Green Lake Path will always be crowded, just as it has always been. Banning bikes is an extreme action that goes against how the path has been used for generations. Even if Parks were prepared to enforce the new rule, is policing people’s style of recreation really where Seattle wants them to put their resources? I doubt it.

People share the path next to the old signage explaining the rules. From Google Street View.

From the Parks Department:

If you’ve visited Green Lake Park recently, you may have noticed some new signage announcing “Pedestrian Use Only – No Wheels” on the inner loop.

This long-term temporary use restriction, which restricts all bicycles and other wheeled uses from the Green Lake Park inner loop (strollers and mobility devices are allowed), is intended to create more space for path users on this high use trail and to provide more time for the Seattle Department of Transportation (SDOT) to complete their design process and coordinate the construction timeline for creating a complete outer loop around Green Lake with protected access for bikers and pedestrians. More information about the Green Lake Outer Loop project is available here.

As part of its outreach on the outer loop project, SDOT launched an online survey to gather community feedback and to better understand community values, what is working, and what could be different about getting around Green Lake. Their survey included a series of questions on the inner loop (see questions 10, 11, 12). A summary of feedback from 4,534 total responses can be found here.

The Board of Park Commissioners held a public hearing and vote on this long-term temporary use restriction on October 28, 2021. The Board will revisit this topic, hear an update on SDOT’s work, and provide advice to the Superintendent about potential paths forward at an upcoming public meeting this summer, likely in June (see upcoming meeting agendas here).

Feedback on this issue is encouraged! Community members can send comments about the inner loop to [email protected], attend the Board of Park Commissioners meeting on this topic this summer, or attend any of our monthly Board meetings (even if Green Lake is not on the agenda) to provide feedback during the Public Comment section.

Feedback on SDOT’s outer loop project can be directed to [email protected].

29 Responses to Without waiting for outer loop path due this summer, Parks Department issues ‘long-term temporary’ ban on bikes at Green Lake