This week at an online open house, SDOT released the results of a survey the department conducted last year around the concept of creating a path for people walking and rolling along the Outer Loop along Green Lake Park’s western edge. Adjacent to Aurora Ave, no sidewalk currently exists, just a dirt path that frequently turns to mud. The idea of repurposing the curbside lane of Aurora, which is actually a continuation of a bus lane on a stretch of road that buses don’t currently use, as a space for people to walk and bike has been kicking around SDOT since mid-2020, according to records Seattle Bike Blog obtained last year. After hearing from over 5,000 people, a huge response for a survey like this, 40% of people said they supported the idea of converting the lane of Aurora compared to 29% of people who said they opposed it. 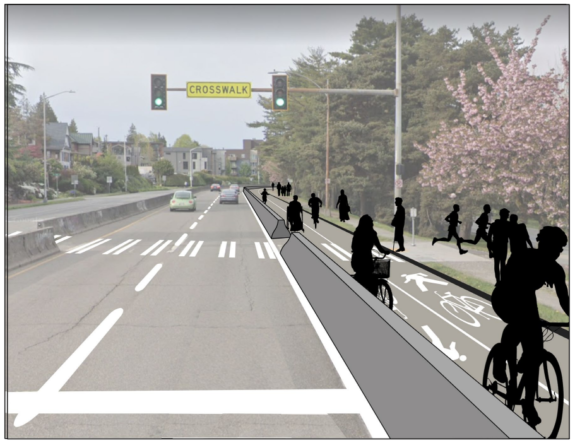 The curbside lane of Aurora Ave N is planned to be converted to walking and biking space by the end of the year. (SDOT)

SDOT also announced that they’ve selected an alternative to the final connection between this new Aurora path and the existing protected bike lane at the north end of the lake, via West Green Lake Drive N. The final design will be a two-way protected biking and walking lane along the lake side, with the rest of the street shifting to a new one-way traffic pattern in the southbound direction in order to retain parking along the street for residents. SDOT says they discarded making the street northbound due to concern about additional traffic diversion for drivers trying to head southbound. This option actually narrowly lost to the option that included parking removal, 42% to 47% but was the one selected by the city. 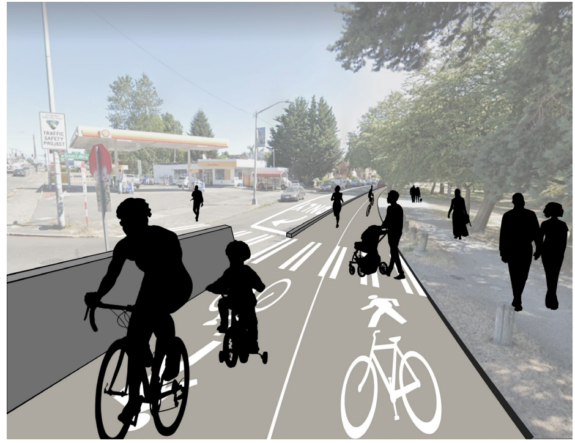 West Green Lake Dr N is proposed to be converted to one-way operation for cars, with a new two-way walking and biking path along the lake side up to Densmore Ave N. (SDOT)

And finally, the department announced that the project, which didn’t previously have construction funding identified, is now fully funded via the city’s Vision Zero program. Most of the $1 million cost is anticipated to come from purchasing concrete barriers for the segment along Aurora, but SDOT says they are looking at how to repurpose existing barriers from elsewhere to keep costs down. The Vision Zero program is expected to see a higher amount of revenue in the next few years thanks to an increase in the city’s commercial parking tax set to take effect this year. Previously Vision Zero funding has been used to create separated space for people to bike on 12th Ave S in Little Saigon and on NE 65th Street.

Once complete, the Green Lake Outer Loop project would finalize a safe place to bike around the entirety of Green Lake Park. (SDOT)

The survey, like nearly all surveys on transportation projects, wasn’t exactly representative of Seattle as a whole: only 22% of respondents said they are renters (renters are a majority of Seattle residents) and 80% of respondents said they are white. Green Lake Park receives some of the highest usage in the entire Seattle Parks system and how to use the street space immediately adjacent to it is a citywide concern, although attention to impacts to nearby residents should certainly be paid.

During the open house, SDOT shared early renderings of how the facility will work at the transition points between the different segments, including the infamous slip lane from Aurora onto West Green Lake Dr N, where drivers will no longer be allowed to exit because of the conversion to one-way traffic. 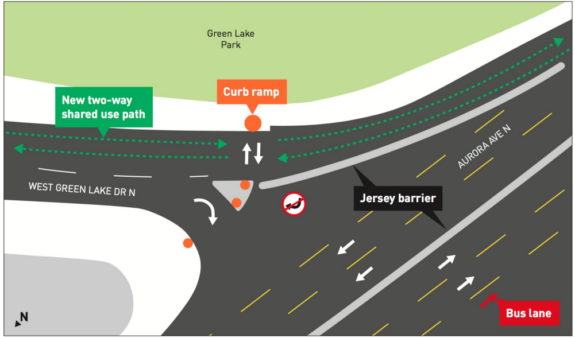 The existing slip lane from Aurora onto West Green Lake Dr N will be eliminated, with turns off Aurora restricted. (SDOT)

SDOT will create a way for people on bikes to transition from the West Green Lake Dr N walking and biking space across Winona Ave N. (SDOT)

During the meeting, SDOT staff outlined a “worst-case scenario” of traffic impacts from the conversion of West Green Lake Dr N to one way operation: an additional 500 vehicles using Winona Ave N instead and an average delay per vehicle of 18 seconds for drivers turning off Aurora. In return, the city will be creating a pathway for people biking around the entirety of Green Lake Park. Currently Seattle Parks is prohibiting people on bikes from using the inner loop trail, with a permanent restriction on the table as that department assesses the competing uses for that trail.

Creating joint walking and biking space isn’t a widespread habit of the department, but in this case allowing people who walk or roll to use the bike space is probably the only way the city was going to be able to cheaply create an ADA-compliant pathway around the west edge of Green Lake Park. Because SDOT is treating the new facility as a multi-use trail, they will not be installing traffic signals for bike traffic at the signalized crosswalks across Aurora as they might with a protected bike lane project.

SDOT is currently aiming for a construction date of “Summer-Fall”  2022 for all of these improvements, making it one of the fastest rollouts of quick build protected biking and walking infrastructure in recent memory. Across town, the department has still not even announced a planned route for a safe biking corridor in north Beacon Hill after spending all of 2021 doing outreach around the different options. This disparity can’t be ignored when looking at the Green Lake Outer Loop project and the vast differences in the ability of different areas of the city to be able to move projects like this forward.

You can read more about the Green Lake Outer Loop at the project website.

Ryan Packer is Temporary Editor of Seattle Bike Blog.
View all posts by Ryan Packer →
This entry was posted in news and tagged green lake outer loop. Bookmark the permalink.