Alert 3/7: Mercer Island Station construction will detour section of the I-90 Trail ‘long-term’ 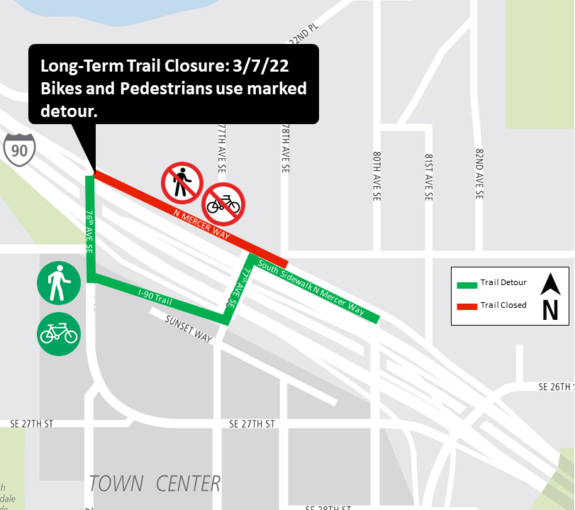 Work to build Mercer Island Station and redesign the bus connections there will displace a section of the I-90 Trail starting March 7, Sound Transit announced. Though the work area may change as work progresses, expect some kind of trail detour for about a year.

The closed section runs along the north side of N Mercer Way between 76th Ave SE and 80th Ave SE. This section is the most direct bike route option for people crossing the island. Crews will also close one of the lanes on N Mercer Way, taking it down to one lane in each direction.

The good news is that there is already a trail connection that bypasses the closed section. In fact, maps often label this alternative trail “I-90 Trail” even though the Mercer Way route is used much more. It is a bit longer, but it is more pleasant. People who don’t want to detour can ride in mixed traffic on N Mercer Way, though there will not be a temporary bike path on the roadway.

The detour route sends riders south across the freeway in the trail along the east side of 76th Ave SE. That trail curves and heads east through a small freeway-adjacent park before reaching 77th Ave SE. The official route turns north on 77th to cross back over the freeway before sending riders east for a block on the sidewalk along the south side of Mercer Way. This sidewalk is not very wide, especially for two-way walking and biking travel.

Another option would be to start the detour all way back near the ball fields in Aubrey Davis Park by taking the south fork in the path rather than the more common north fork. This path stays south of I-90 and crosses 76th to connect to the detour route’s path. Then continue on the trail until reaching the existing trail connection on 80th, which connects back to Mercer Way and the rest of the I-90 Trail near the park and ride. Below is a map of the general idea: 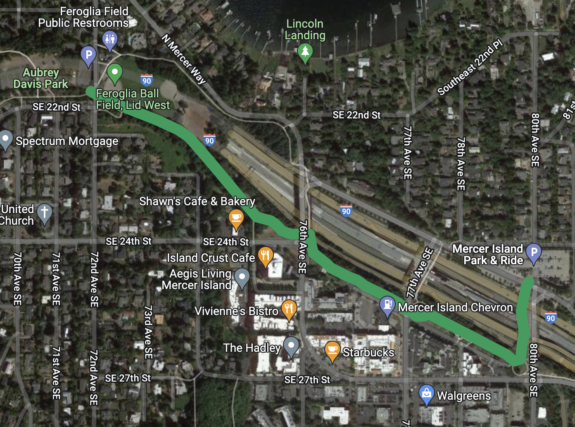 Do you have a detour option I didn’t list? Let us know in the comments below.

5 Responses to Alert 3/7: Mercer Island Station construction will detour section of the I-90 Trail ‘long-term’