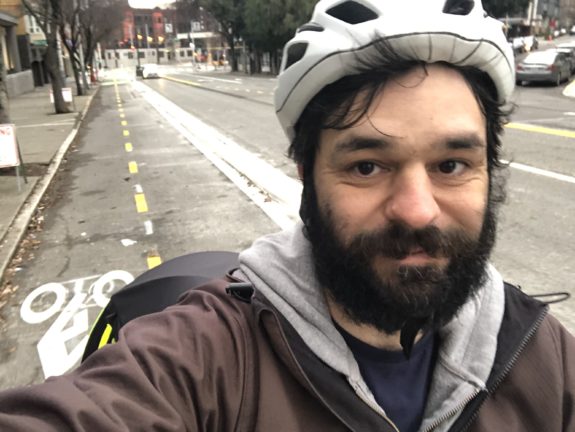 There’s finally a bike lane from downtown to the Lower Queen Anne/Uptown business district. Over the weekend, crews constructed a two-way bike lane on Broad Street between the existing bike lane on 2nd Avenue to 1st Avenue, then on 1st from Broad to Denny Way. Though just a few blocks long, the new lanes make a difficult connection from the downtown bike network to the recently-completed bike lanes on 1st, Thomas Street and Queen Anne Avenue. This is an improvement for people biking northbound, and a brand new option for people heading southbound. 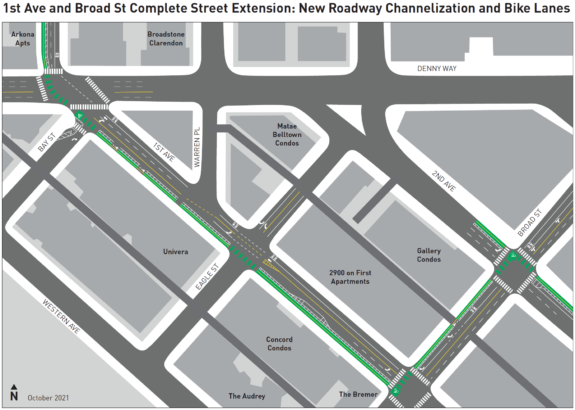 As noted in our preview post last week, the new bike lane is a two-way bikeway that requires a pair of somewhat awkward turns at 2nd and Broad and at Broad and 1st. The whole thing feels a bit squeezed in, but it works OK. It certainly beats the way things used to be. Previously, people biking northbound needed to mix with car traffic on 1st, then cross the terrifying angled intersection with Denny into a skinny paint-only bike lane in the parked car door zone. But at least people headed northbound had an option. There was effectively no direct bike route for anyone headed southbound from Uptown to Belltown. The best option was to head several blocks and an extra hill climb out of the way to Seattle Center. 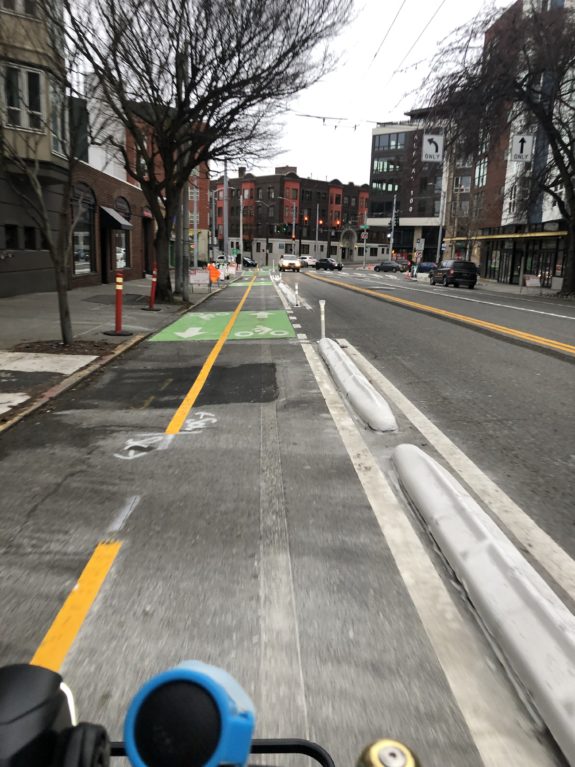 The new bike lanes were constructed quickly, but crews installed pre-cast concrete curbs to separate the lanes from car traffic rather than the more common paint and plastic posts. This was absolutely the correct decision because 1st Ave can be busy. The curbs make it feel much safer and should prevent people from parking in the bike lane, though we’ll have to see how that goes. On-street parking was removed in order to create space for the bike lanes, though some parking was added on Broad Street to offset the reduction a bit. 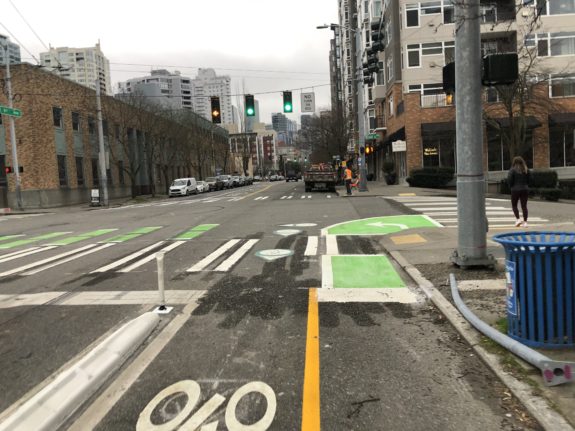 The biggest shortcoming of the project is the lack of protection and clear waiting space for people making left turns at the intersections. The photo above is looking southeast on 1st Ave at Broad. There is a green turning box people are supposed to bike into and wait until the light on Broad changes so they can head northeast. But without physical separation from people turning right from 1st onto Broad, it just doesn’t feel comfortable to use. In this case, it’s better to just stop at the end of the bike lane and wait there, which I expect many people will do.

The bigger problem is at 2nd and Broad. People heading to southbound 2nd Ave toward downtown are forced to wait awkwardly through up to two signal cycles. I don’t have a good photo, but here’s a diagram: 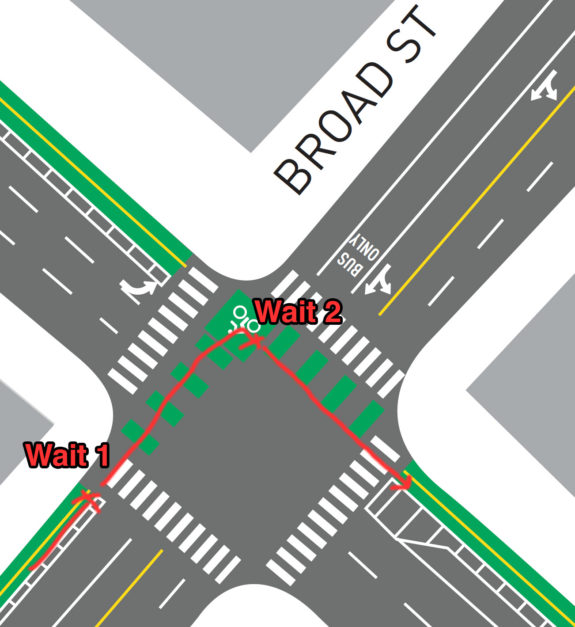 It is pretty annoying to have to wait two whole signal cycles just to cross the street. But the bigger issue is that there simply is not enough room in the green box for more than one or maybe two people to wait (my family cargo bike pretty much took up the whole thing on its own). Everyone else will just have to stack up in the middle of the street, which is not comfortable.

Luckily, there is a solution that fixes both these problems at the same time: An all-way walk and bike signal phase. This would let everyone cross to wherever they are going in one phase without anyone needing to wait inside the intersection. This could also be a big benefit for people walking because only the north sidewalk on 2nd has access to Seattle Center, meaning there are potentially a lot of people who would save a street crossing if they could walk diagonally here, especially before and after major events. Below is an old StreetFilm that explains the basic concept (though obviously there are a lot more bike in this example than at 2nd and Broad):

Finally, I hope the team takes a very close look at way to make sure people in cars and trucks obey they red left turn arrow from northbound 1st onto Denny. I went though the intersection twice when testing it out, and someone tried to turn across the bike lane both times. When I was there, no signs were in place saying “No Turn On Red,” which I assume are coming soon. But it is extremely important that people follow this turn signal. It’s a big and confusing intersection, and people in cars are far away from the red arrow when they are waiting at the stop line. This is a mission critical element, and I’m not the only one who has had issues there already:

Have you ridden the new bike connection yet? Let us know your thoughts in the comments below.