The Transportation Committee has been relatively quiet in the past couple years under Pedersen. According to the City Clerk’s Legistar calendar, the committee only held 9 out of a potential 24 regular meetings in 2020 thanks to a 168-day meeting cancellation streak between March 4 and August 19 (note that the West Seattle Bridge broke March 23, and there were special meetings about that). The committee stepped it up in 2021 by holding 18 regular meetings.

UPDATE: Councilmember Pedersen reached out to clarify the committee’s 2020 work. March through June, many committees including Transportation conducted their business during full City Council meetings and during full Council briefings, he said. The Committee also focused mostly on the Seattle Transportation Benefit District measure due for voter passage in November 2020. Finally, because committees don’t meet during budget deliberations, the total potential meetings per year is more like 20 or 21 rather than 24. I appreciate the Councilmember’s clarifications, and I can see how my original text came off as more critical than I had intended. 2020 was obviously a very unusual year.

But the next two years will need to be much busier because there is a lot of work to do to watchdog the final years of the Move Seattle Levy investments and prepare city transportation plans ahead of whatever transportation funding measure replaces Move Seattle in 2024. Anyone who has been snoozing on Transportation Committee business (*author looks into mirror*) will need to start paying much closer attention.

Seattle has an enormous opportunity to be a national leader in sustainable transportation with a bold ballot measure in 2024, a high-turnout Presidential election year. Mayor Bruce Harrell and the Transportation Committee will both have opportunities to craft this measure, and they won’t have a ton of time to do so. Committees could see another shake-up in early 2024 after the 2023 City Council election, but much of the transportation measure will likely be developed by then.

Here is the committee membership roster for (likely) the next two years: 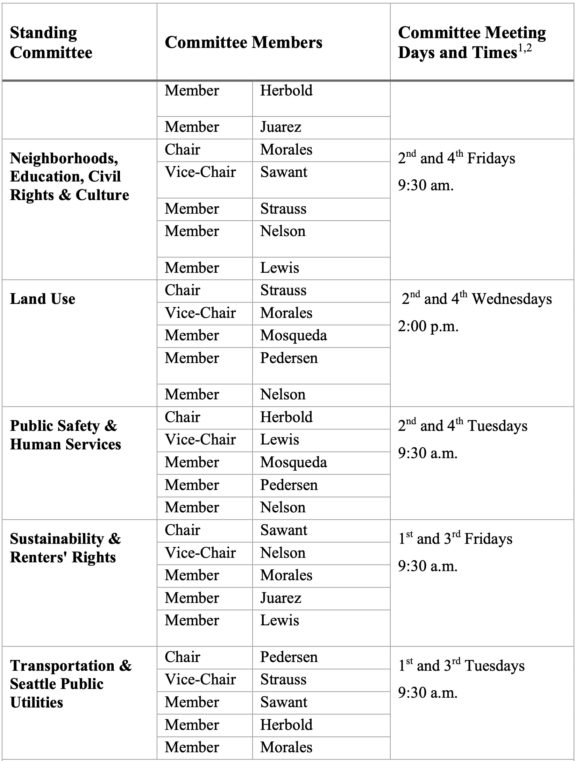 Founder and Editor of Seattle Bike Blog.
View all posts by Tom Fucoloro →
This entry was posted in news and tagged alex pedersen, transportation committee. Bookmark the permalink.