The Climate Cavalry Is Us, Councilmember Pedersen

Last week, District 4 Councilmember Alex Pedersen’s office sent an email including highlights from his first year in office. It included a section titled “Transportation and Climate Change”. An excerpt:

Seattle is not about to let up on its efforts to reduce address climate change, which currently include reducing carbon emissions and increasing our resiliency (“adaptation”) in the face of the negative environmental changes already underway. But as Chair of the Council’s Transportation & Utilities Committee, I can tell you it’s a relief that a new federal administration is entering that clearly embraces the science, the national and international efforts required to reverse the global threat, and the environmental and economic benefits of transitioning to a more green economy. This includes President-Elect Biden’s appointment to the U.S. Dept of Transportation, the Dept of Energy, and a new cabinet-level climate advisor. I believe the climate calvary [sic] is coming.

While reaction to the news of former South Bend Mayor Pete Buttigieg being named Biden’s Secretary of Transportation has been mixed among transportation advocates, there is little doubt that Biden is taking the issue of climate change more seriously than probably any other incoming President in history. There is an unprecedented amount of momentum behind the incoming administration to do climate-related work.

But with the recent news that Seattle’s overall emissions increased between 2016 and 2018, and  the fact that we are wildly off-course on reducing our transportation emissions compared to the goal passed by the city council in 2013, it’s dangerous for the chair of the transportation committee to be waiting for the federal government to get Seattle on track to reduce emissions. The climate cavalry is here, and it is us.

Most cities in the US do not have a publicly-owned power utility, much less one that has been carbon-neutral for fifteen years. Few cities have bucked a national trend of declining transit ridership due to decades of disinvestment. Even if you include industrial and air sector emissions, Seattle’s per capita emissions are already less than half of the nationwide per capita total. We have a huge advantage relative to the rest of the country, and we want the cavalry to come help us?

For the chair of the Transportation & Utilities Committee, it has been a very unusual year to conduct committee business, that’s for sure. But after the outgoing transportation chair, Mike O’Brien, made sure that the committee had a role in shepherding the progress of the modal master plans, this year the committee has spent no time reviewing the updates & impact to project completion from the mayor’s budget cuts. SDOT is far behind on its yearly goal for new sidewalk completion, as just one example, with the schedule to catch back up currently unclear. The 2013 Climate Action Plan, which the Durkan administration has only tacitly embraced, connects all of these existing plans together and recognizes that they further the city’s climate goals, but implementation requires leadership.

Earlier this year, Councilmember Pedersen chaired the committee to send the renewal of the Seattle Transportation Benefit District back to the voters. The Mayor’s proposal was smaller than the original STBD passed in 2014, due to the exclusion of a car-tab fee while the fate of I-976 was uncertain, which translates to fewer transit service hours being funded. A 50% increase was proposed in committee, from a 0.1% to a 0.15% sales tax, but Pedersen voted no on that amendment. Thankfully it passed anyway, and voters resoundingly said yes. Just last month, with a car-tab fee unlocked after I-976 was ruled unconstitutional, Pedersen teamed up with councilmembers Lewis and Herbold to propose using the money to fund bridge maintenance instead of transit, weeks after SDOT just cut the ribbon on a brand new $100 million bridge in SoDo.

Seattle scaling back transit investments, on the heels of the wildly successful transit benefit district providing very frequent transit service to 70% of city households in 2019, will absolutely lead to more car trips and increased emissions. The Biden administration can’t save us from making own-goals like that.

Transportation emissions are 60% of the city’s core emissions but Seattle still lacks a concrete roadmap to achieve reductions. The Transportation & Utilities committee did make sure to find time to pass Seattle City Light’s transportation electrification plan, which certainly needs to be a part of the solution, but electric vehicles cannot be the entire solution, and Seattle is in a relatively advantageous position to show the rest of the country how it is done. Seattle’s reputation as being on the cutting-edge of urban design & innovation is wearing thin as our leaders choose the easy way forward. 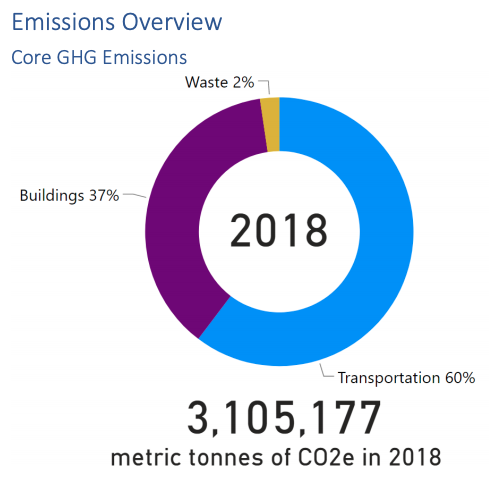 The Biden administration is not going to prevent Seattle from building a new cruise ship terminal. Nor is it likely to stop the building of another regional airport even as emissions at Sea-Tac and King County airports have shot up 40% since 2008.

Thinking of the incoming administration as the climate cavalry is backwards, and Seattle deserves better.

3 Responses to The Climate Cavalry Is Us, Councilmember Pedersen