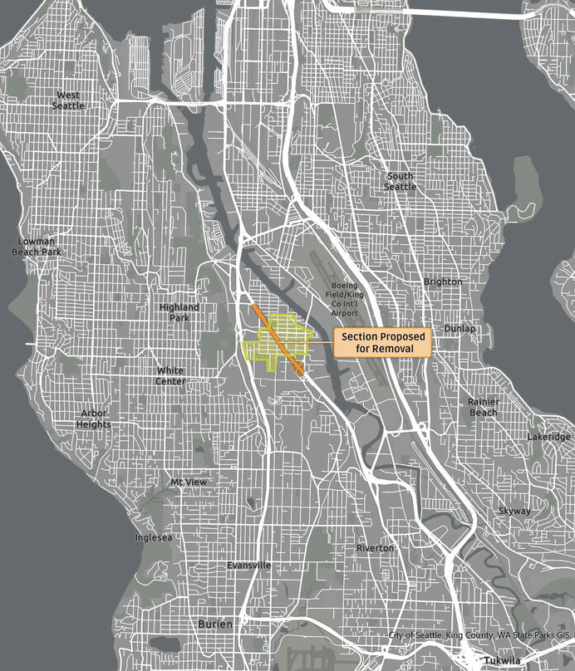 All images from Cultivate South Park.

South Park has some of the most harmful air quality of any residential neighborhood in Seattle and King County, and it doesn’t take long to figure out where a lot of it comes from: The freeway that splits the neighborhood in two.

It’s a story that has been repeated many times across the city and the nation. Low-income communities and communities of color are often located in the areas with the worst air quality and the most dangerous roadways. This is not an accident. Perhaps no neighborhood better represents our region’s environmental racism more starkly than South Park. 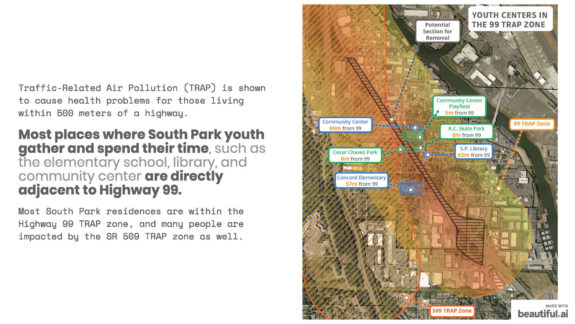 “The cumulative impacts of these environmental burdens result in a 13-year lower life expectancy for South Park residents compared with other Seattle neighborhoods,” according to Cultivate South Park, a “resident-led Asset-Based Community Development organization.” But it doesn’t need to be this way. South Park is a flourishing community that deserves clean air and safe, connected streets, and Cultivate South Park is taking on the biggest barrier to both of these goals: SR-99.

“What if we were to close this segment of 99 and reclaim 40 acres of land for affordable housing, community owned businesses, parks and amenities that serve the people of South Park?” That’s the bold and very exciting question at the center of the organization’s Reconnect South Parks proposal. With leadership at the national, state and city levels all talking about reducing the community harm caused by past freeway projects, this project is the perfect opportunity to stand by those words.

Black and brown neighborhoods have been disproportionately divided by highway projects or left isolated by the lack of adequate transit and transportation resources.

In the Biden-Harris administration, we will make righting these wrongs an imperative.

While removing a freeway sounds like a very lofty goal at first, it’s important to remember that even busy freeways are often causing more traffic problems than they fix. Especially within cities, the limited freeway access points create choke points that are impossible to remedy. Freeway engineering digs trenches and builds walls that cut off the street grid, and this actually limits mobility rather than improving it, especially for anyone not in a car.

But this proposal is not about removing a busy freeway, and that’s what makes it extremely feasible low-hanging fruit as a freeway removal project. This stretch of SR-99 is redundant, overbuilt and underutilized. It is surrounded on all sides by much busier freeways with better or comparable access to nearly all regional destinations. If you open Google Maps, it’s actually kind of difficult to get the program to suggest taking SR-99 through South Park over the alternatives. The other options are nearly always faster or within a minute of taking South Park’s SR-99. 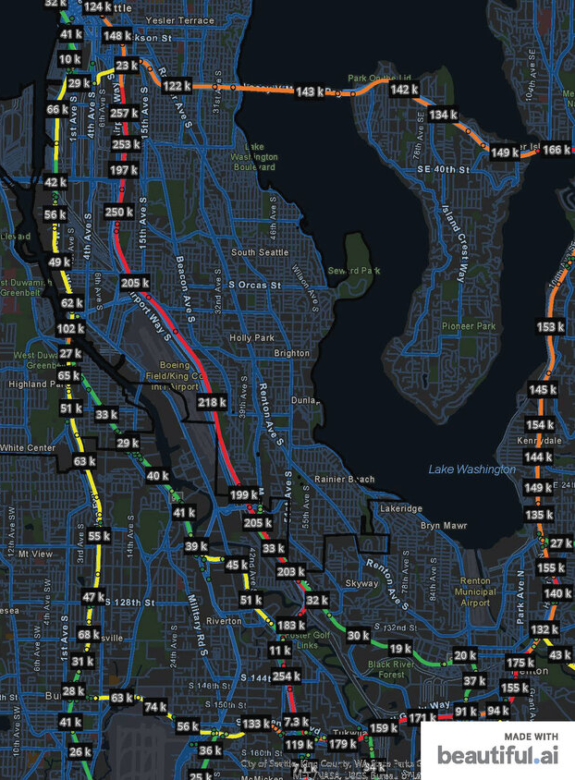 As a result, the traffic counts on this stretch of SR-99 are extremely low. At 29,000 to 33,000 vehicles per day, this freeway carries fewer cars than many Seattle neighborhood arterial streets. For comparison, NE 45th Street in the U District carries about 34,000 vehicles per day and MLK Jr Way S in Rainier Valley carries about 45,000. Even South Park’s main street, 14th Ave S, carries 39,000 vehicles per day, nearly 10,000 more than this giant freeway (these are all pre-Covid, pre-West Seattle Bridge failure 2019 figures). The region simply has no use for a freeway here. This facility was built to carry several times more vehicles than have a reason to use it.

Though this stretch gets the SR-99 designation, SR-509 is the primary freeway connection to SR-99 south of the Duwamish River. Many people driving south on SR-99 probably don’t even realize they have changed freeway numbers as they cross the river. The stretch through South Parks blasts through the neighborhood as a full-fledged freeway before turning into the commercial Tukwila International Boulevard. Even the industrial businesses nearby would likely benefit from a reconnected street grid since there are very few access points to the freeway currently. This freeway was designed to bypass South Park, not to serve it.

To top it all off, there is an egregiously massive full cloverleaf interchange where SR-99, 14th Ave S and Des Moines Memorial Drive S come together. People biking to and from the Green River Trail know this interchange well because it’s so big and stressful to get past on a bike. This is the kind of thing you find where major urban freeways meet, not a few neighborhood arterials. It’s frankly embarrassing that the state put such an oversized piece of infrastructure here. It’s like using a jackhammer to hang a photo on the wall. 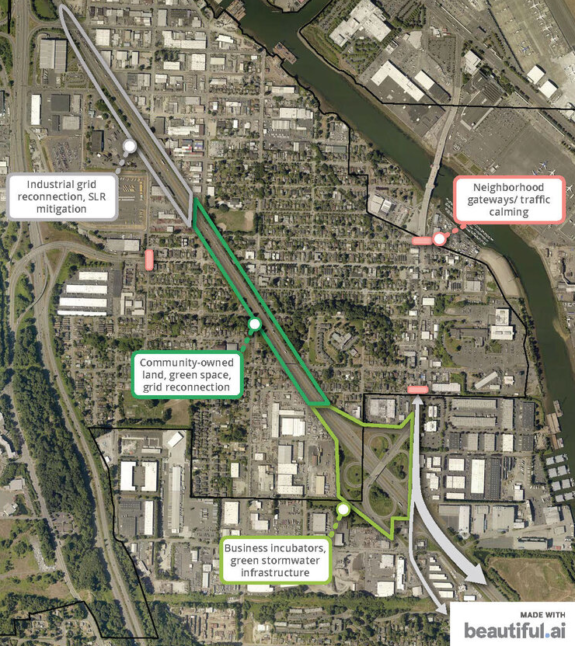 Here is where the Reconnect South Park vision gets really exciting. The group has some really cool ideas for how this reclaimed land could be put to better use. First, they would reconnect the street grid, enabling people to safely and easily walk, bike and drive around the neighborhood once again. It would also likely make it easier to provide quality bus service to the homes and destinations west of SR-99. The new streets could also provide the whole neighborhood with easier and safer access to the Duwamish Trail to the north and the Green River Trail to the south.

Even after reconnecting streets, there would be a lot of new industrial, residential and business land available. The organization imagines new green space, which is sorely needed, as well as new affordable housing and community-owned land. The giant cloverleaf could be repurposed for green stormwater infrastructure or business incubators. The opportunities are wide open, and the neighborhood should take the lead on determining how to better serve residents.

The neighborhood has faced a long history of displacement as major infrastructure and industrial projects forced people out or divided their community. It’s long past time for the infrastructure to move out of the way of the residents.

“I think the freeway is something residents have just accepted,” Crystal Brown, a South Park resident who is part of the project, told The Urbanist. “Who thinks you can move a freeway?”

You can get involved by signing up for the Reconnecting South Park email list at the bottom of the project website. You can also donate to Cultivate South Park or fill out their volunteer form.