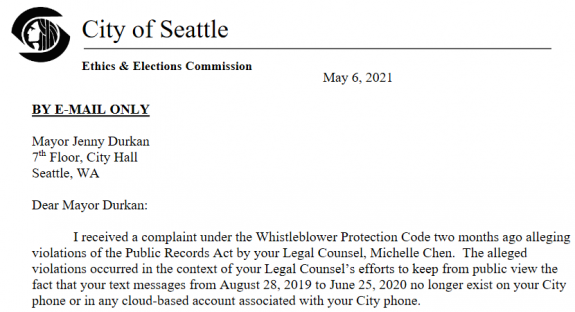 A letter to Mayor Durkan from the Seattle Ethics and Elections Commission (Full Letter PDF).

Mayor Jenny Durkan, then-Police Chief Carmen Best and Seattle Fire Chief Harold Scoggins all deleted or otherwise lost their text messages from the midst of one of the most tumultuous times in Seattle history. The mayor has hidden the loss of these texts from the public since at least August in an apparent attempt to cover-up her breach of public disclosure laws, and one whistle-blowing public records officer resigned out of fear of retaliation while another has been placed on unpaid leave after they bravely informed the public about the cover-up. Our city owes Kim Ferreiro and Stacy Irwin a debt of gratitude (and probably compensation, too).

Jenny Durkan has destroyed whatever trust the public might still have in her, and she is not fit to be Mayor of this great city.

Though she denies it, the deletion of these texts looks like an attempt to hide damning information from the public. Perhaps those texts include the answer a gigantic, extremely consequential question Durkan and Best have continually dodged: Who ordered police to abandon the East Precinct? Or maybe those texts could shine a light on who was ordering police officers to gas people protesting police brutality and the murder of George Floyd every day for more than a week. The mayor publicly ordered SPD to stop using tear gas, yet the practice continued. Did she lose control of the department, or did she lie to the public? One of those must be true, though neither is good.

Mayor Durkan’s failures of leadership last June were so egregious that Seattle Bike Blog joined many other groups in calling for her resignation or removal from office. Seattle Bike Blog has not changed that stance.

She has refused to answer the public’s questions about these decisions, and now key records that could have provided insight have been deleted not just from her phone, but also the phones of the public officials in the relevant chain of command. This stinks of possible criminal activity and must be investigated as many elected officials and candidates have demanded.

But even if the public were to accept her dubious defense that she accidentally set her phone to auto-delete texts thinking they were saved in the cloud somewhere, her fully conscious and purposeful cover-up of the missing public information is more than enough reason for her to leave office and should also be investigated. The Seattle Ethics and Elections Commission (“SEEC”) has already found her Legal Counsel Michelle Chen in violation of the Public Records Act (PDF) for failing to disclose the missing texts and trying to conceal that they were missing. But the SEEC finding raises more questions than it answers, and should be just the beginning.

When Mayor Durkan is conducting public business, her texts do not belong to her. They belong to the people. Every city employee whose communications quality for public disclosure are trained in how to preserve their records including their texts. Durkan, who was a U.S. Attorney before running for mayor, is very familiar with public disclosure laws. It is vital to the integrity of our democracy that we have the ability to observe how our elected officials are conducting city business in our names. We must know who ordered the precinct to be abandoned, for example, because we need that information to make better electoral choices in the future. That’s how democracy works. Mayor Durkan deleting the texts and then covering it up is nothing short of an attack on our democracy.