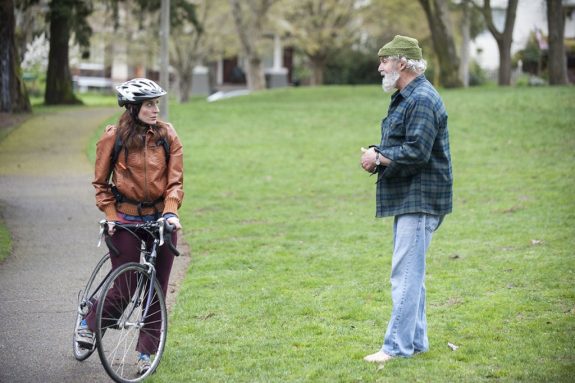 You have until Sunday (5/16) to stream Phoebe’s Father from the Northwest Film Forum website. And you should! Tickets are sliding scale $5–$25 ($10 suggested) for a 48-hour streaming rental.

We wrote about the film back in 2015 when it first came out. It’s a family drama centering about Phoebe’s (Marie Lazzaro) strained relationship with her father (the late Lawrason Driscoll). Meanwhile, she discovers cycling and starts training to race. So she processes a lot of what’s going on while biking around Seattle. That is extremely relatable to me, because that’s what I do!

There are many scenes inside Recycled Cycles in the U District and along various trails and bike routes. Locals Jessica Cutler (then a pro cyclist, now founder of the Northwest Women’s Cyclocross Project) and longtime racer David Friedt were cycling consultants on the film.

Oh, and its a good movie, too. Very character-driven with excellent acting.

American films are notoriously bad at representing transportation cycling (people biking just to get around). It’s practically a rule that if a character rides a bike in a movie, they will be hit by a car. That or a character riding a bike is a symbol of them being poor or unlucky or juvenile.

But Phoebe’s Father is different. Her biking around town is never scoffed at, and it feels realistic to watch her go from a new rider to someone who discovers that riding is a great way to get out and process everything that’s going on in her life. When she gets overwhelmed by a heavy family issue, she gets on her bike. Partly, it is about escaping from difficult feelings, but it becomes a way for her to exert some control over her life rather than letting the decisions and desires of others control her. It’s a lovely metaphor that also generates many opportunities for scenic shots. They aren’t fast action shots, they just show biking around Seattle for what it is, creating space for her to work through her emotions. I hope other filmmakers take some lessons from director John Helde here.