A majority of the City Council, led by Councilmember Dan Strauss, voted Wednesday to defer their decision on issuing a large bond until they have more details on what it would fund and when the money would be needed.

As we reported last week, the City Council is considering a 20-year, $100 million bond on a $20 vehicle license fee that would put 75% of funds into bridge work rather than the focus on safe streets that SDOT’s community outreach process recommended. Over the course of 20 years, this could result in an $80 million reduction in funding for safe streets projects according to an action alert from Seattle Neighborhood Greenways.

Of course most of the city’s bridges are vital infrastructure, and the city will be hit with a significant bill for the West Seattle Bridge soon. So it may be that bonding against some of the vehicle license fee will be needed at some point. But Seattle does not have a list of shovel-ready projects that need the immediate funding a bonding measure would generate. That’s why Transportation and Utilities Committee Vice-Chair Strauss proposed a successful amendment that would hold off on issuing bonds until projects and their schedules are identified.

“We must dedicate city funding to the work of investing in our bridges that is matched by state and federal dollars,” said Councilmember Strauss during the meeting. “We need to have a more accurate and detailed understanding of our maintenance and investments needs, and we need to use this information to raise the correct amount of bonds at the right time to invest in our infrastructure rather than taking on unneeded debt until we’re ready to use it.

The initial version of the bill, as proposed by Committee Chair Alex Pedersen, would have called for issuing the bond without knowing the scope or schedule of the work it would fund.

“If this non-binding language was enacted on today, we would raise bonds without shovel-ready projects,” said Strauss. “This means we would be paying bankers interest on dollars we would not be ready to spend today.”

Strauss also rejected the argument that the bond money could pay for the planning studies to get projects shovel-ready, saying, “This would be akin to taking out a home loan to pay for our groceries.”

CM Pedersen withdrew his version and instead supported the Strauss amendment. It passed 5–0 (Pedersen, Strauss, González, Herbold, Morales), which means it has enough votes to pass at the next full Council meeting.

This is a partial win for safe streets advocates and for prudent budgeting practices in general. The bill still requests SDOT to produce a list of “transportation projects that could be funded by $100 million of bond financing in 2022” that includes “a minimum of $75 million of bridge maintenance, bridge repair, and bridge replacement projects” by September 30. All decisions about bonding will be made later during the budget process, but the bill’s request sets them up to receive a list of bridge projects seemingly regardless of priority and need. It just says, Give us a list of what you could spend $75 million on. It just feels backwards to start with the funding and then find projects to fit in it.

Meanwhile, Mayor Jenny Durkan’s SDOT has slashed the walking, biking and transit promises made to voters who approved the 2015 Move Seattle Levy. SDOT also cut some seismic upgrade projects for bridges that were promised in the levy. So we do have a known list of safety projects that were ready to go before their budgets got cut. Bonding to quickly catch up on this work is intriguing.

Vision Zero projects are vital, too. They save lives and make progress on the Council’s climate and equitable mobility goals. CM Morales pointed out this concern in her comments.

“My hope is that we don’t see these two things as mutually exclusive,” she said. “We need bridge maintenance and we definitely need to be moving toward our Vision Zero goals for pedestrian safety.”

The question, of course, is how to balance the funding we have. The vehicle license fee is one of the few funding sources the city has that can be spent on safe streets and transit. So much state and Federal money is earmarked for roads and bridges, but safe streets projects must rely almost entirely on local dollars. At the same time, replacing or significantly repairing a major bridge is going to cost many times the amount the city can raise from bonding against the $20 vehicle license fee. A bond might be a useful way to match a state or federal grant, but it would be a drop in the bucket of the total bridge costs facing the city. 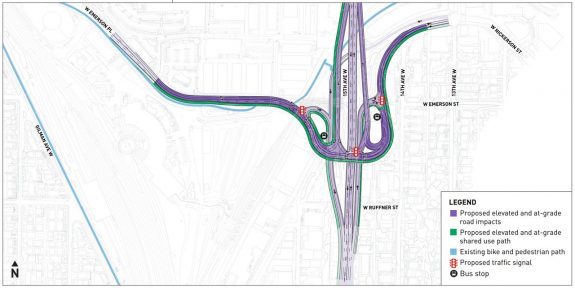 SDOT is studying whether to expand the freeway-style interchange at the south end of the Ballard Bridge.

The Council should also maintain oversight over the projects that get this funding because some early proposals would move the city backwards by expanding the freeway-style infrastructure in our city, especially around the Magnolia and Ballard Bridges. The Council should not write any blank checks for this work and should stand up for its higher-level goals when funding any of that work.