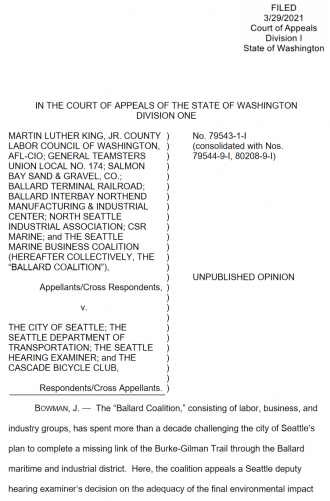 Many Seattleites have only ever known life with the Ballard Missing Link of the Burke-Gilman Trail held up in court. Children born when the City Council first approved the route are now getting ready to vote in their first election. Seattle has nearly wasted an entire generation arguing over about 1.2 miles of trail, and the Washington Court of Appeals just decided to extend the fighting even longer.

The court ruled this week that the Seattle Hearing Examiner needs to redo a 2018 decision that determined the city’s massive environmental study of this short trail segment was sufficient. That study rivals freeway megaprojects in scale and depth. It’s an absurd document that took years to create and goes over the entire trail proposal with a toothbrush.

But the Appeals Court’s decision has nothing to do with the study’s findings or the trail design or even the businesses along the planned route. In fact, it seems to have little or nothing to do with SDOT or the trail at all. Instead, the court levied a rather harsh rebuke of Ryan Vancil, now the Seattle Hearing Examiner. In 2017–18, Vancil was hearing the appeal against the Missing Link’s environmental impact statement as Deputy Hearing Examiner. At the same time, he had applied to replace the city’s retiring Hearing Examiner and was going through the interview process, a fact he did not disclose during the proceedings. Because the City Council appoints the Hearing Examiner and the Missing Link was a Council-approved project, “Vancil violated the appearance of fairness doctrine,” the Appeals Court wrote in its decision reversing King County Superior Court’s decision.

“Because the deputy hearing examiner failed to disclose that he was seeking appointment by the Seattle City Council to replace the retiring city hearing examiner while he was also considering the adequacy of a council–endorsed project, we reverse the trial court’s summary judgment in favor of the city, enter summary judgment for the coalition, and remand for a new hearing.”

SDOT said in a statement that “the decision was solely concerned with the procedures followed by the Hearing Examiner, which were outside of the Seattle Department of Transportation’s (SDOT’s) control or knowledge. The decision did not include any negative findings about SDOT’s plans or Final Environmental Impact Statement.”

But the result is largely the same, at least in the near-term. The project now needs to go back to the Hearing Examiner, and that means more delays. And to the Ballard Coalition, that’s a win.

“This is another significant setback because the City, for a fourth time, has to completely re-do SEPA for the Missing Link, further wasting tax payer dollars,” Ballard Coalition attorney Josh Brower said in a press release celebrating the decision.

So for reasons that have nothing to do with the trail design or safety or bike advocacy or even the Seattle Department of Transportation, the Missing Link is delayed again. Brower has once again proven effective at finding technicalities and legal maneuvers to delay work on this trail. After losing a case, accusing the court of impartiality is a shoot the moon strategy with a low chance of success. But Brower pulled it off, unfortunately.

There is one hopeful note. Seattle passed an ordinance in 2019 designed to limit appeals to projects like the Missing Link. The idea was to prevent future endless legal battles like this one, so I guess we’re about to put that ordinance to the test.

Meanwhile, people continue to crash and get injured while biking through the Missing Link. And that will continue to happen until it is fixed.

On March 29, 2021, the Washington State Division 1 Court of Appeals issued a decision on the Burke-Gilman Trail Missing Link Final Environmental Impact Statement (FEIS). The decision was solely concerned with the procedures followed by the Hearing Examiner, which were outside of the Seattle Department of Transportation’s (SDOT’s) control or knowledge. The decision did not include any negative findings about SDOT’s plans or Final Environmental Impact Statement. Nonetheless, this means that SDOT cannot proceed with construction of the Burke-Gilman Missing Link Trail until additional procedural steps are taken.

We are disappointed with the recent ruling, but we remain committed to completing this critical safety improvement project along our selected route. We are looking at all options available to move forward expediently to protect our most vulnerable street users.

Founder and Editor of Seattle Bike Blog.
View all posts by Tom Fucoloro →
This entry was posted in news and tagged burke-gilman trail, josh brower, missing link. Bookmark the permalink.