Biking the new I-90 Trail tunnel and flyover in Factoria

The I-90 trail just got a major upgrade in Factoria.

A new bike trail tunnel and flyover opened Wednesday allowing trail users to bypass the busy intersection with Factoria Blvd and the I-90 off-ramp entirely. It also saves users some elevation change.

I biked out there to try it out Wednesday, and it’s fantastic. Not only do users now get to skip a stressful intersection, but it also crosses over to a new trail on the north side of SE 36th Street. Previously, trail users had to use skinny paint-only bike lanes, a significant gap in the major trail.

For now, the trail ends at 132nd Ave SE, where users can cross at a light to access the bike lanes. But work is underway to extend the trail to 142nd Pl SE, which has bike lanes across I-90 toward Bellevue College.The eventual goal is to extend this new trail all the way to Lakemont Blvd SE, which would be much more direct than the current route, but that segment is not funded.

The 3.6-mile stretch from Factoria Blvd to Lakemont Blvd is known as the “Eastgate Gap,” and this project crosses one of the more difficult sections. 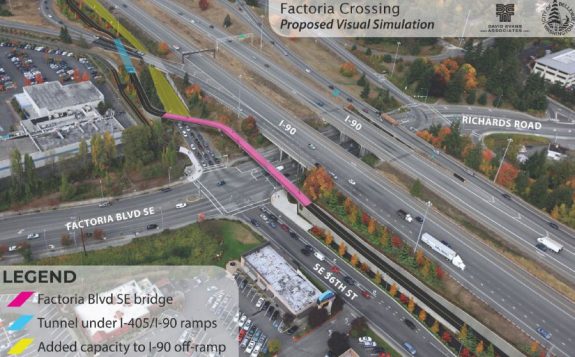 The project was not cheap, and the final segment won’t be cheap, either. This newly-opened section cost $21 million, a rather astounding figure. But of course the project wasn’t just about the trail. It was also a freeway ramp widening project that added another lane to the exit ramp. That lane needed the space where the trail used to be, so this tunnel and flyover were designed to get the trail out of the way.

There is so much freeway infrastructure in this area, it’s kind of amazing that this trail exists at all. Bike advocates have been working a long time to get all these little bits of space. The trail doesn’t fix the freeway problem, but at least there’s a way to get through it.

From the Bellevue press release:

People who walk, ride and roll in Bellevue will have a safer trip with the official opening today of a new segment of the Mountains to Sound Greenway Trail in the Factoria neighborhood. It’s the first step to fill the 3.6-mile “Eastgate Gap” in the regional trail, which runs along the Interstate 90 corridor from Seattle to Issaquah.

The City of Bellevue built the project, with funding support from the state of Washington and in partnership with the Mountains to Sound Greenway Trust. The 0.8-mile long section, from Interstate 405 to the 132nd Avenue Southeast, cost $21 million to construct and features both a pedestrian-bicycle tunnel under ramps from I-405 to eastbound I-90 and a ped-bike bridge over busy Factoria Boulevard.

Early work on filling the Eastgate Gap in Bellevue began when the Greenway Trust obtained a National Scenic Byways grant in 2011. Additional funding came from Bellevue and the Puget Sound Regional Council, with construction funds from the State Legislature.

The Bellevue segment of the trail is part of the Mountains to Sound Greenway Trail, which runs through a portion of the Mountains to Sound Greenway National Heritage Area. The vision for trail connections throughout the Heritage Area is that a person walking, rolling or bicycling could travel for recreation or commuting on safe, non-motorized trails that connect Puget Sound urban areas all the way to Central Washington.

Founder and Editor of Seattle Bike Blog.
View all posts by Tom Fucoloro →
This entry was posted in news and tagged bellevue, factoria, I-90 trail. Bookmark the permalink.