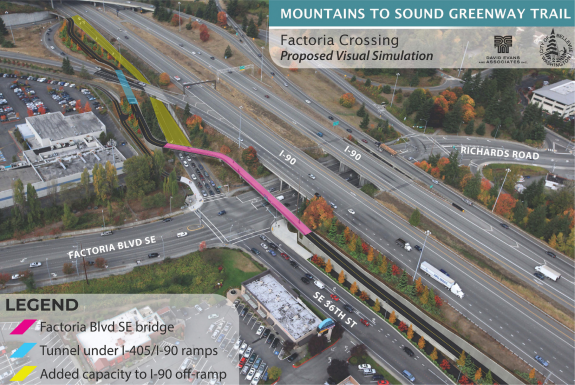 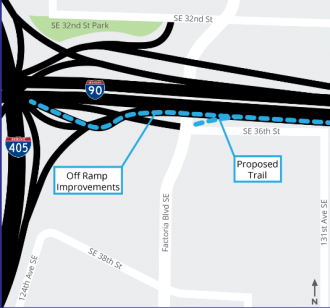 Work is still continuing on an improved I-90/Mountains to Sound Trail connection over Factoria Blvd SE in Bellevue.

The project broke ground in the fall and is still aiming for completion in late 2020, according to project manager Chris Masek.

Previously, the trail dumped users onto the sidewalk at the southwest corner of the intersection of Factoria Blvd SE and SE 36th St. Users then used the crosswalk to access a paint-only bike lane on 36th to continue on the major trail route.

The new connection will create an overpass allowing trail users to fly over the I-90 off-ramp and Factoria Blvd, ending up on a new trail running along the north side of 36th to 132nd Ave SE. Users headed east will have to cross the street there to access the existing bike lane, at least for now.

The project is part of a long-planned series of improvements to the so-called Bellevue Gap, the worst section of one of the region’s most important bike routes. Bellevue plans (PDF) to continue the new trail all the way to Lakemont Blvd SE, where it will meet up with SE Newport Way. This will save users from crossing I-90 twice and navigating unfriendly SW Eastgate Way. 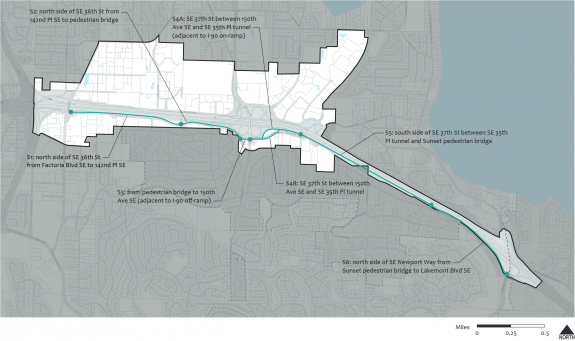 The section under construction is short, but it’s also complicated and difficult. The price tag is $17.7 million, though much of that cost is to move a section of the trail so they can add another lane on the I-90 off-ramp. Adding that lane will require a new trail tunnel under the eastbound on-ramp from I-405.

Founder and Editor of Seattle Bike Blog.
View all posts by Tom Fucoloro →
This entry was posted in news and tagged bellevue, bellevue gap, I-90 trail. Bookmark the permalink.