SDOT has released a study looking at how to improve access for people walking and biking around two coming light rail stations at the north end of the city. The station in Shoreline at 148th Street is currently planned to open with the Lynnwood Link extension in 2024, and the planned infill station at 130th Street was originally scheduled for 2031, but this year the Sound Transit board will be voting on whether to move that up to 2024 so that they open at the same time.

This is the result of community engagement since 2019 being headed up by Seattle’s Office of Planning and Community Development, in conjunction with land use changes in the surrounding neighborhoods.

The study includes a current map of “level of traffic stress” for people biking around the vicinity of both stations. It has a lot of red, including a segment of pretty much every east-west route someone would use to access either station. The only separated bike facilities are the Interurban trail, pretty far away from the I-5 corridor where the train stations are, and a loosely protected bike lane on Pinehurst Way. The red on the map underscores the fact that there isn’t much of a bike network, and that we have a lot of work to do. 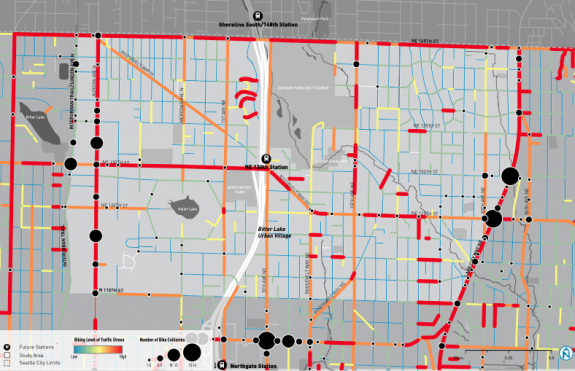 “Level of traffic stress” map for the area around these two light rail stations. (Click to enlarge)

This gets ahead of the planning for station access at these stations, but the projects “will still need to compete for transportation funding resources” from sources like the next transportation levy (starting in 2025, if it passes) or Sound Transit’s station access fund. The study also says “we encourage the community to pursue other available funding sources identified in the City of Seattle’s Community Resource Guide”, aka finding your own funding sources to improve access to light rail stations.

All of these projects will be built on top of the improvements coming directly at the stations themselves. NE 130th Street station is currently planned to have a ten foot “shared use path” directly outside the station running along 5th Ave NE between 130th and 145th Street. This will be the only pedestrian access between these two streets except for the pedestrian trail that exists on the edge of Jackson Park golf course, which is not fully accessible. The I-5 side of 5th Ave NE will not have sidewalks; riders who get off the trail will meet a dead-end at the north end of the station exit.

Shoreline is currently planning to build a pedestrian and bicycle only bridge across I-5 to connect with the station at NE 148th Street. That bridge will connect via trail with 1st Ave NE but it doesn’t look like there will be any bike facilities on that street, with riders directed to the “off-corridor bike network” in Shoreline, aka neighborhood greenways. 5th Ave NE directly outside the Shoreline station also won’t have any bike facilities, according to the most recent plans. 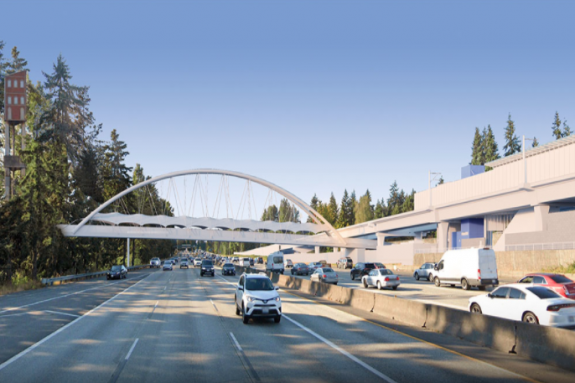 As for the study itself, the projects that were ranked highest in the study are likeliest to be prioritized, tier 1 projects were defined as “provid[ing] direct access to the future stations; the rest of the network builds on these projects.” In other words, if these projects aren’t complete or in progress by the time the station opens, we will have missed a big opportunity.

So what are the highest-ranked projects in the study? 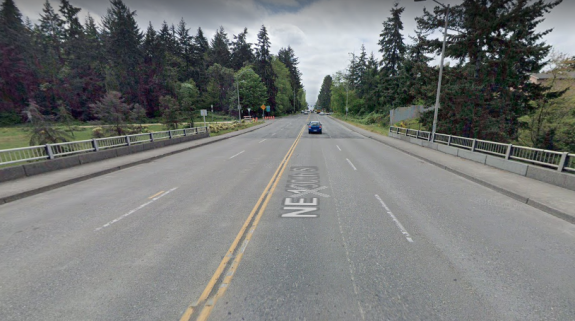 Unsurprisingly, one of the top improvements here is to remake the bridge over I-5 at 130th Street which is currently four travel lanes and fairly narrow sidewalks. The recommended treatment here is a shared use path on the north side of the street (the light rail station will be completely on the north side). 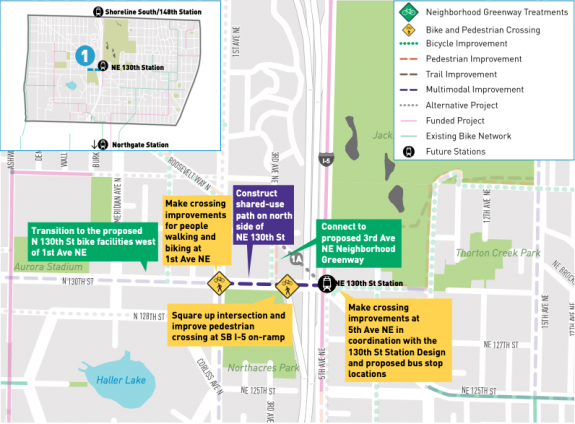 A shared use path is proposed for the north side of NE 130th Street. (Click to enlarge)

Extending the shared-use path all the way to Aurora Ave is looked at as a separate project, but a neighborhood greenway on N 128th Street is also cited as an alternative. “This option would reduce conflicts between transit and bikes on N 130th St” is perhaps the wrong way to think about that.

145th Street is a state highway between Aurora Ave and Lake City Way, SR-523. Shoreline is taking the lead on street improvements on the corridor, with the latest proposal adding two roundabouts to the intersections on either side of I-5 at 145th, 1st and 5th Ave. The only bike facility currently proposed for the corridor would be a short stretch of shared-use path on the north side of the bridge over the interstate. 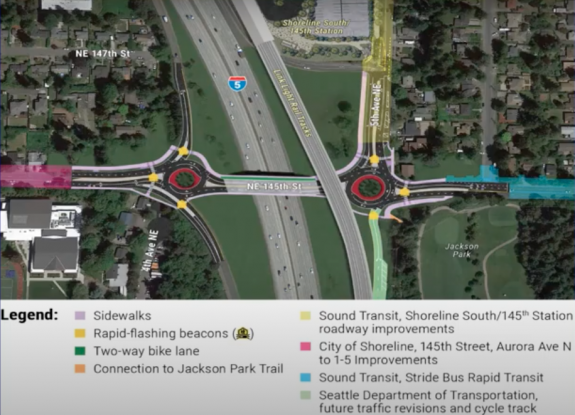 Current early plans for I-5 at 145th Street. (Click to enlarge)

The top rated projects on the Seattle side for 145th are almost entirely all crossing improvements. Improvements to the sidewalk adjacent to Jackson Park golf course were also included- there the sidewalk is frequently encroached on by vegetation and utility poles, and it’s just an unpleasant place to walk. That sidewalk is the only way to complete a full loop around the golf course.

On the southern end of Jackson Park golf course, the trail cutting east to west will be a frequently used pathway for people accessing the light rail station at 130th, with or without improvements to it. The most likely improvements are to widen the existing trail that connects with 5th Ave NE. But SDOT is also considering reclaiming right-of-way that doesn’t currently exist along 10th Ave NE to create a connection between Jackson Park and 130th Street. This could include neighborhood greenway elements and separated pedestrian facilities. 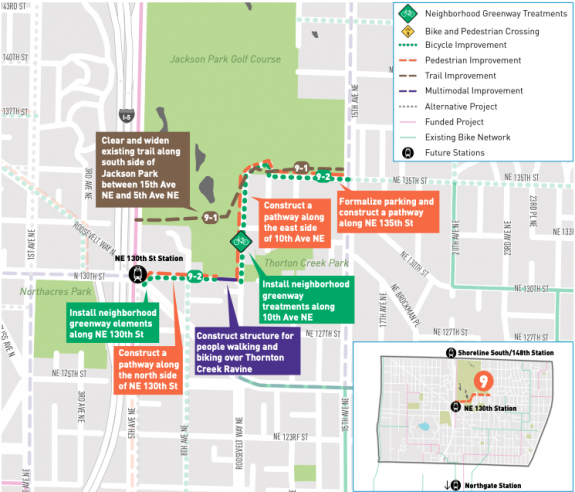 A number of projects could improve access to 130th Street Station via the Jackson Park trail. (Click to enlarge)

Roosevelt Way NE is a diagonal street connecting directly between 125th and 130th Street at the proposed light rail station. 125th currently has paint bike lanes, but they disappear at Roosevelt Way (as well as in the other direction before Lake City Way). 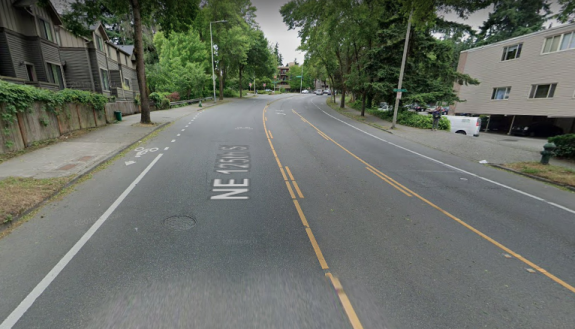 This project would install protected bike lanes between 125th and 130th, and take the number of general purpose lanes on Roosevelt down from four to three. This would really improve bike access between the station and the heart of Lake City. 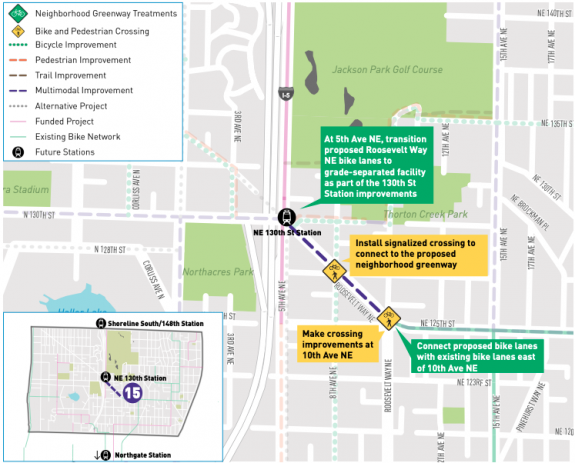 Protected bike lanes could be added to Roosevelt Way NE. (Click to enlarge)

Seattle is really good at creating plans, and there’s a lot of great ideas in this study for making it easier to get around the vicinity of these light rail stations, at least one of which is opening in just a few years. Identifying funding sources is pretty important to getting these actually built, but it’s likely there will be a lot of competition for those pots of money when they become available. Most of these projects are pretty essential in getting the most out of the billion-dollar light rail investments that our region is making, and we should treat them that way.

You can read the entire Station Access Study which includes many more proposed projects at SDOT’s blog.