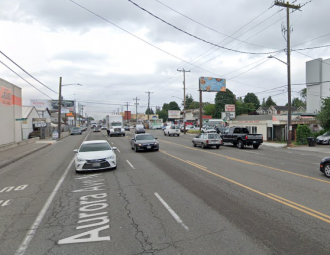 Another speed study conducted last August further south at N 68th Street, just south of a zone with a 30 mph speed limit, showed slightly lower speeds despite a speed limit of 40 mph at that spot. There 19% of drivers were clocked at going over 45 mph with 26% of drivers recorded at that speed up at 112th.

Most of Aurora Ave N has a speed limit of 40 mph, with segments signed for 30 and 35 mph in the most dense commercial areas along the state highway. In late 2019, Mayor Durkan announced that nearly every single arterial in the city would have its speed limit lowered to 25 mph, but a state highway like Aurora Ave requires the city to coordinate any speed limit changes with the state and so far we haven’t heard any indication it will be moving to lower speed limits here.

As the speed studies show, simply lowering the speed limit will likely not do much to influence driver speed; more comprehensive design changes will be required. But the problem is urgent: in the past two-years, ten people have died on Aurora Avenue in Seattle, most of them people walking along the street. Statistically, a pedestrian struck by a vehicle traveling 40 mph has a one in ten chance of surviving the crash.

SDOT Director Sam Zimbabwe responded early this morning after several North Seattle state legislators in recent weeks indicated support for changes to improve safety on Aurora but pointed toward a need for SDOT to take the lead on those changes. He was responding to Lee Bruch, an outspoken advocate for a safer Aurora Ave. His response:

“It is great to hear about the State-level support for continued investment in Aurora. We continue to work on small-scale changes to address the most challenging locations, but there is a limit to what results those can bear. Some planning and project definition work is really the next step for us on those larger investments, which is reflected in that grant you cite below. We face major investment needs in safety and infrastructure across the city and will need partnerships at all levels to bring those to fruition with the urgency needed. The planning work will better define what comes next while we continue to work on smaller steps to improve safety for all users.”

The City has applied for a state grant that would fund most of a $2 million study to determine changes to the street. It is frustrating to have to wait for a new study to be able to implement design changes to lower speeds on a street that has had the same problems for decades, but if that’s what’s necessary to ensure that the changes are comprehensive, so be it. Aurora Ave was just repaved for its entire length, which would have been a perfect chance to implement changes, but not even sidewalks could be added where they are currently missing.

Bruch told me today he was positive about Director Zimbabwe’s response: “I agree with him on the necessity to do long range planning”, but told me there were a lot of spot improvements that could be made along the corridor. One of those is a possible expanded sidewalk protected bike a jersey barrier near Green Lake where a UW student was struck by a car in 2019. He also pointed toward the closure of the slip lane off Aurora onto West Green Lake Drive as an example of where obvious improvements could be made. 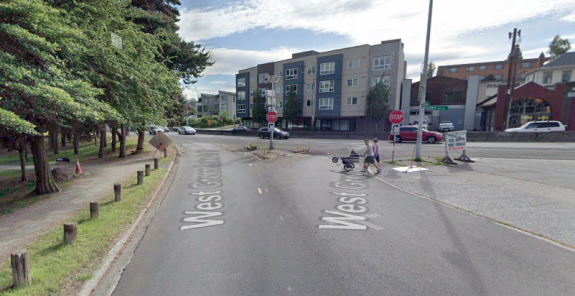 Ultimately, Aurora Avenue needs to be redesigned for lower speeds along its entire length. While it’s true the city faces a lot of need for safety improvements as Director Zimbabwe indicates, Aurora Ave sees a huge proportion of the injuries and fatalities on Seattle’s streets, and to date it doesn’t seem like the City is treating it that way.

Ryan Packer is Temporary Editor of Seattle Bike Blog.
View all posts by Ryan Packer →
This entry was posted in news and tagged aurora, vision zero. Bookmark the permalink.