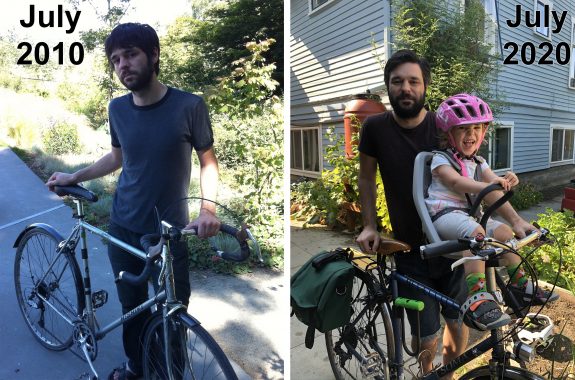 In July 2010 at the midst of the Great Recession and with very little money in the bank, I quit my job to become an independent bike journalist.

I had no idea what I was doing. I had no idea how to run a business. I didn’t know anyone in bicycle advocacy. But I did have a background in journalism, which I used to track down people who did know what they were talking about so I could ask them questions.

A lot has changed since I started writing this site, both in Seattle and in my own personal life. When I started this site, people would have laughed you out of the room for suggesting that the city build a protected bike lane downtown. Also, I’m a dad now.

I am currently working on a book for UW Press about biking in Seattle, and it’s been fascinating to get out of the day-to-day contemporary coverage and try to look at the big picture. The movement for safe streets still loses all the time, most often in the form of funding (millions of local, state and federal tax dollars are spent on car stuff without anyone blinking an eye, but every dollar for walking and biking gets scrutinized and left exposed to budget cuts). But transportation culture has clearly shifted toward seeing walking, biking and transit as our city’s path forward. Culture and bureaucracy just take so long to change directions that when you’re on the ground in the moment, it doesn’t feel like they’re changing at all.

2020 is a major inflection point in our history. In some ways, the book I’m writing now feels like the conclusion chapter for an era of transportation history. By the time the book hits shelves (estimated 2022), it may describe a world that is in many ways unrecognizable. 2019 already feels a decade away. 2010 is ancient history. The way the city used to actively and purposefully prioritize car speed (“Level of Service”) over the safety of someone riding a bike or walking in a crosswalk feels as barbaric and archaic as bloodletting to balance a person’s humors.

The biking community in Seattle has also changed a lot. Most obviously, it has grown. And the vision has evolved to be more bold, ambitious and inclusive. And it feels like the next generation of biking leaders are finding their voices and innovating new ways that biking can be tools for direct action and community organizing for causes beyond biking itself. Biking has become more of a core piece of Seattle culture and less of a special interest. Changing a culture is so hard, and I know so many of you have poured enormous amounts of time and energy into shifting the way our city thinks about transportation and safe streets. Thank you.

Before the pandemic, I had lots of fun ideas for the blog’s tenth anniversary celebration. None of those are possible now, of course, because they all involved getting together with you all. I miss all those Seattle bike gatherings, planned and spontaneous, where I would get to see longtime readers and meet new ones. We will get to do that again someday.

Founder and Editor of Seattle Bike Blog.
View all posts by Tom Fucoloro →
This entry was posted in news and tagged 10th anniversary, seattle bike blog. Bookmark the permalink.