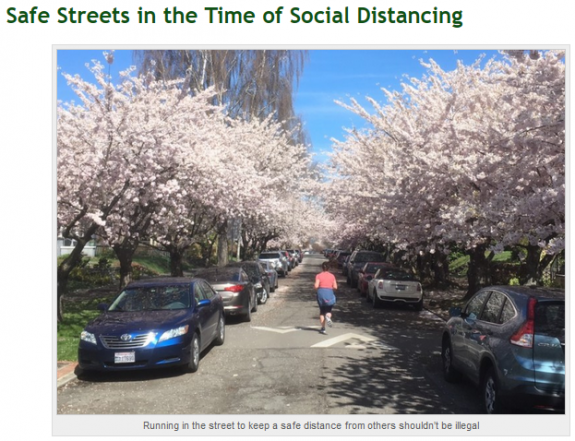 Since we last wrote about the potential for open streets to reduce crowding on Seattle sidewalks and paths, the city has opened a couple streets within parks to people walking and biking in Seward Park and Volunteer Park. And Settle Neighborhood Greenways has created a guide for the city that makes the case for opening more space for walking and biking and suggests some ideas for how Seattle can make streets work better for everyone during this difficult time. UPDATE: Major Seattle Parks will close entirely this weekend, the Seattle Times reports.

SNG is also collecting your ideas for open streets opportunities through an online form. So if there’s a street near you that you think would help you and your neighbors walk and bike safely if only it were car-free, let SNG know.

The in-park street closures like Volunteer and Seward Parks make a ton of sense and were easy to do. The parking lots and destinations in each park were already closed to limit crowding, so closing the roads to cars and opening them to people walking and biking just required putting up some barricades and signs. There are likely other streets through parks that could (and should) be closed to cars just as easily.

There may also be streets where it would be simple and cheap to cone off a general traffic lane to create more sidewalk or biking space. This would have the added benefit of reducing speeding, which has gone way up in many places as some people driving take advantage of wide open roads.

And being easy to implement is important, since it’s unlikely the city can or is willing to dedicate a lot of staff and resources to open streets events. So as great as a citywide network of major car-free streets would be, it makes more sense to look for opportunities that would not require any (or very little) active staff. And a spokesperson for Mayor Jenny Durkan said as much to Eli Sanders at the Stranger:

Kamaria Hightower, a spokesperson for Mayor Durkan, said that right now “the health and safety of the public and our workers are the top priority,” and that closing Seattle streets to create more space for outdoor recreation is under ongoing consideration.

But, Hightower added, “While we’ve seen some cities close streets in recent weeks, we know they have also witnessed some challenges due to crowds and staffing capacity constraints. That’s something she’s trying to balance before making any decisions.”

Hightower may be referring to New York City, where Mayor Bill DeBlasio has backed off on a short-lived open streets effort abruptly, citing costs. Those events were heavily staffed by NYPD officers. There is debate in that city about whether there were more officers and staff than necessary, but opening busy streets with lots of intersections in dense areas is a significant undertaking.

But there are a lot of opportunities that would not require such staffing. Many might not require anything more than some barricades, cones and signs. And as the peak of the local crisis seems to be trending in the right direction (Keep going, everyone! It’s working. Don’t stop now!), we will hopefully soon start to talk about what this summer looks like. If we need to maintain social distancing, the need for open streets will only get bigger. This is especially true of neighborhoods without access to parks with adequate space. And it may make sense to have more significantly staffed open streets then, though that’s (hopefully) a conversation for another day.

An early opportunity to rethink open streets is coming up next month: Seattle Parks has announced the planned dates for Bicycle Sundays on Lake Washington Boulevard: May 10, 17 and 24, June 14 and 21, July 5 and 12, August 9, 16, 23 and 30, and September 6. However there are justified concerns that these events might not be feasible because they can be so popular. But rather than cancel them, perhaps they should consider how to expand them. They are busy because every visitor has to pack into just a few hours on a couple days of the month. What if they were all day? Or all day every day? Or what if the route were longer? Then visitors would be more spread out. And sure, some of the usual programming that is part of Bicycle Sundays might not work, but that doesn’t mean the open streets part wouldn’t. How much open time and space can Parks staff create with their existing (or a modestly expanded) budget? With Seward Park closed to cars at the south end of the event, it might be even easier to manage traffic than usual.

Another possibly easy fix would be to make it legal to walk on non-arterial neighborhood streets. SNG even outlined how city code could be changed to expand the existing rule allowing walking on neighborhood streets that don’t have sidewalks to also include any non-arterial street. The tricky part here would be informing the public about the change and getting people to respect the law while driving.

SNG laid out a three-pronged way of thinking that could help guide the city’s decisions: