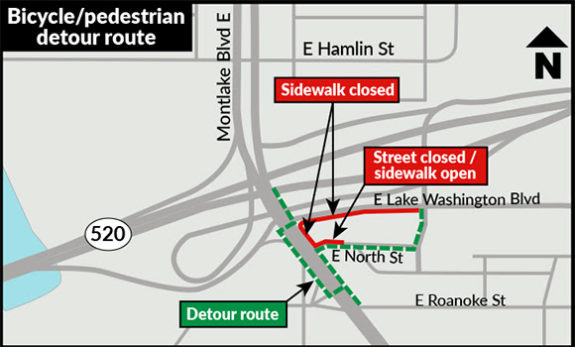 So you finally got used to biking around the SR 520 construction in Montlake, eh? I have bad news. It’s about to get way worse for two weeks.

Starting as soon as Monday, people walking and biking on the east sidewalk, the current designated route, will have to cross Montlake Blvd twice to use the west sidewalk to get around a closure of the sidewalk between E Lake Washington Blvd and E North Street.

This is especially rough because using the east sidewalk was already a poor bike detour ever since the state closed biking and walking access across the 24th Ave E bridge in September. The signal at Lake Washington Blvd only has a crosswalk on the south side and there’s a slip lane for traffic to turn right from Montlake Blvd to Lake Washington Blvd. So everyone will need to squeeze into this tiny little triangle surrounded on all sides by traffic and wait for the walk signal: 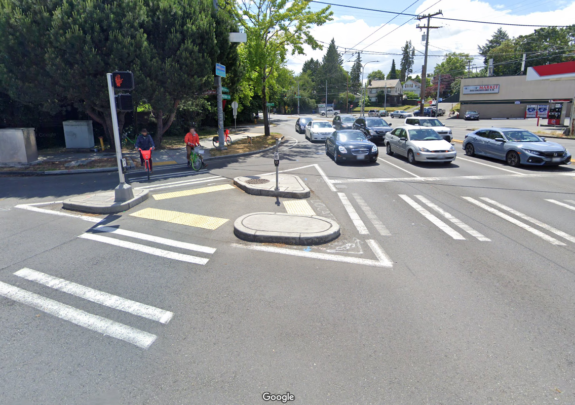 Once this is the only biking and walking option, is everyone going to fit in the little triangle?

This is not a good detour. People biking and walking are already squeezed too much in this area, and this just makes it ridiculous. The triangle problem aside, there’s a good chance that everyone walking and biking will need to wait for three long signals now instead of just one, which could add several minutes to your one-block journey across Lake Washington Blvd, depending on your signal luck. And that’s the best case scenario: That you waste a significant amount of time.

A worse case is that it might be annoying enough that some people will just risk walking or biking around the construction instead, a dangerous but entirely predictable result of an inadequate detour. The 520 team needs to do better than this. This is a situation the screams out for a temporary path in the street around the construction zone. The right thing to do would be to reduce the number of traffic lanes from five to four rather than put everyone biking and walking in this possibly precarious position.

If this is really how the detour works come Monday, then folks who are willing and able may do better to just take the lane on Lake Washington Blvd for the block between 24th Ave E and Montlake Blvd. Once on 24th, follow the signs for the Lake Washington Loop. It’s odd and takes you down an alley, but it works. This is obviously not a solution for everyone, but is it much worse than squeezing into that triangle if there are a bunch of people already there? The state is forcing you to choose between two bad options here.

I’m sure people will figure it out and make it work because anyone who walks or bikes in this town is used to awful construction detours by now. But that doesn’t make it OK. This is part of a $4.6 billion publicly-funded project. Washingtonians deserve better than this.

WSDOT notes that even after this two-week closure, work on this water line will require periodic closures for the next couple years. More planning and care needs to go into those future detours.

As early as next Monday, Jan. 27, crews will begin work on an access pit at the corner of East North Street and Montlake Boulevard. This work requires a closure of a portion of East North Street and sidewalk closures along Montlake and Lake Washington boulevards. These closures will be in place 24 hours a day for approximately two weeks. Local residents will have access to their homes via 24th Avenue East. For your safety, please follow the signed detour routes.

This closure is the first of several intermittent closures crews will implement to replace a 54-inch-diameter city water line that runs beneath the highway. The water-line installation work will take place in stages, requiring periodic detours throughout 2020 and potentially into 2021.

Founder and Editor of Seattle Bike Blog.
View all posts by Tom Fucoloro →
This entry was posted in news and tagged Bike Route Alert, montlake, sr 520, wsdot. Bookmark the permalink.