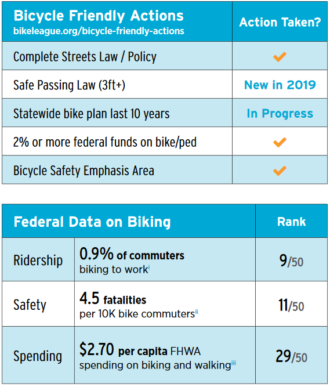 From the League of American Bicyclists’ report card (PDF).

After Washington won the top spot in the League of American Bicyclists’ bike friendly state list for a decade straight from 2008-17, the League took a different tactic in 2018, providing each state with a report card to show how they have improved (or not) over time.

But the rankings are back for 2019 and, sure enough, no other state has put any effort real effort into taking the top spot from Washington. So hip hip hooray, we’re number 1 again, I guess.

Look, Washington is not a cycling utopia. Out state still dramatically under-invests in safe streets and non-motorized transportation. Traffic deaths and serious injuries for people biking and walking are going up, not down. The statewide bike commute rate (according to a flawed annual Census survey) is hardly budging from 1%, where it has been for the last decade. The only thing we really have going for us is that the other 49 states are terrible at walking and biking safety, too.

Yes, some WSDOT staffers are truly great and the state legislature does some good things. But come on, are we going to go another decade at number 1 just because no other state feels like lifting a finger to give it a try?

OK, yes, many states have people or maybe even a small staff of people working hard to improve cycling. But no state genuinely makes walking and biking access and safety a top priority. No state invests actual money in it, just the budget scraps they find in the rotunda couch cushions. A single freeway interchange “upgrade” project can cost in the hundreds of millions of dollars, and states build those all the time. And traffic still sucks after they are complete. Imagine if a state decided that just one of their mega-projects was going to be a statewide bikeways initiative, spending hundreds of millions to build safe bike lanes and trails along state highways that cut through communities. Give that state an award.

I would like this League ranking to be something states need to actually compete for. I want to see states get into an annual bikeways, crosswalks and trails construction race. Because what I really want to see more than anything is our injury and death totals trending down toward zero. Then we can think about pouring a few glasses of champagne.

Below are more details from the report card: 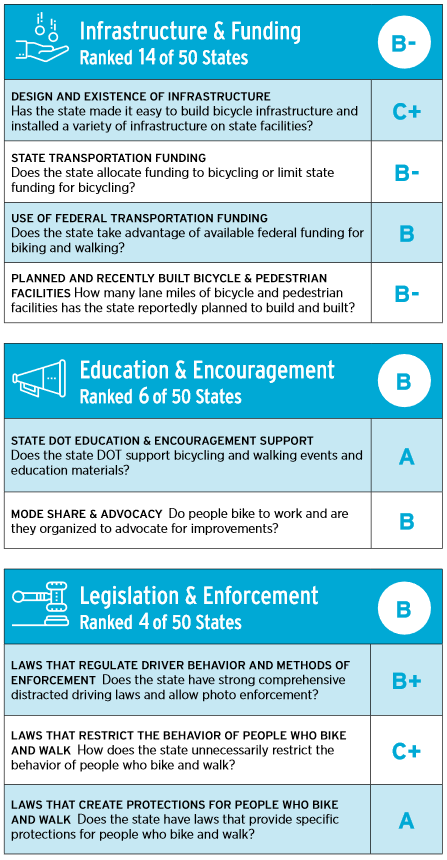 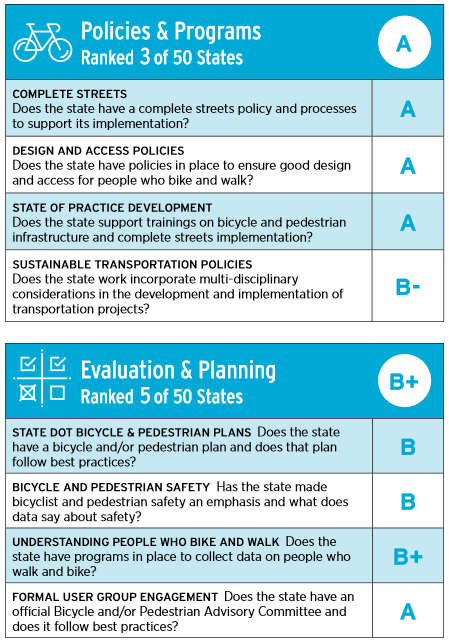 This entry was posted in news and tagged league of american bicyclists, wsdot. Bookmark the permalink.